Pardon the pun, but audiences will reap little from this satanic backwoods juju thriller. Director Hopkins (Lost in Space) has his finger on the “things-pop-out” button, and he’s not afraid to use it, while the script (by Carey and Chad Hayes, who brought you the House of Wax remake) is chock-full of pointless backstory and convoluted flashbacks. The filmmakers intend to be mysterious, but it’s just murky. Swank is a biological researcher who debunks purported miracles, drawing upon the bitter lessons learned from a tragedy in Africa. Elba plays her born-again sidekick, the Mulder to her doubting Scully, and perhaps it’s because he’s black that his backstory is about being shot full of holes and surviving. A hunky small-town sheriff (Morrissey, fighting with the accent) enlists them to discover why the creepy hamlet’s river is running red as blood. The local good ol’ boys suspect the bastard child (Robb) of that devil-worshipping single mother (Andrea Frankle) in the bayou, and they aim to put her down, convinced they are beset by biblical plagues rather than algae gone amok. It’s got the menstrual angle of Carrie, a useful old priest (Rea, who’s really selling it), and other miscellany from better horror films – including the twist at the end, which is shamefully derivative. (To say more would give it away.) There’s nothing wrong with the cast, and Swank once again distinguishes herself as a beacon of authenticity in too-conventional genre material (such as this year’s Freedom Writers). Whenever the script flashes her back to Africa – which is often and possible at any moment – Swank keeps the movie from careering into risibility while the filmmakers bludgeon us with the idea of her cute little blond daughter being sacrificed by heathens on the Dark Continent, a sympathy ploy as weird as it is racist. She is far better than her material here. 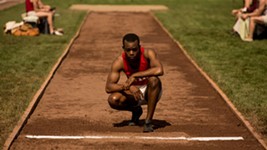 Predator Two
As Super-cop Glover gets closer to the Predator, this alien fighting machine gains nothing resembling coherency or sense. Its modus operandi is search and destroy. ...