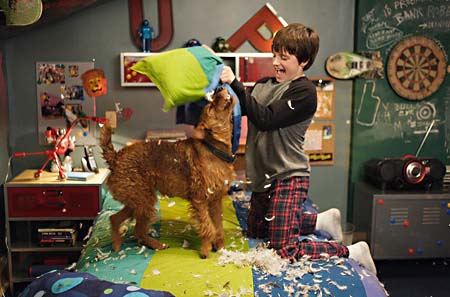 As we exited the theatre, my 5-year-old son turned to me and proclaimed Firehouse Dog the greatest movie ever. He said it had a bad guy and lots of rescues, and it was sort of scary but he wasn’t scared because he’s 5 now. Once the dog rescued a firefighter (Claudette Mink) by digging her out of a cave-in with his paws! That dog was a really great dog, he said. And there was this other part where dogs ran around in a contest, racing through tunnels and jumping through fire, he said, ando a funny joke where one of the firefighters went down the pole too fast and landed on the other firefighter. I agreed that the movie had all these things, but I didn’t like the other parts as much, like the setup, about a Hollywood pooch (animal actors Arwen, Frodo, Rohan, and Stryder) who gets lost during a stunt and ends up a stray outside a downtown firehouse captained by a single dad (Greenwood) with a stubborn school-skipping son (Hutcherson, of Bridge to Terabithia). I liked the parts in which the boy and the dog became friends and the boy solved a mystery; I thought the kid was good, and the dad (who used to make movies with this Canadian guy Atom Egoyan) was actually pretty awesome. But I didn’t like how the dog wore a cheesy bouffant hairpiece and silk robes and did computer-animated stunts and rode a skateboard and farted a lot. All these things were supposed to be funny, but I’d seen it all before in movies about funny animals – and besides, who could beat surfing penguins at that anthropomorphic game? I also questioned the filmmakers’ taste at times. (Item: When Rexx returns to the film set, his handlers reward him with three pastel-tinted lady poodles.) Perhaps the lesson to be learned is that just because we can use computer technology to give dogs goofy faces, that doesn’t mean we should.

The Wizard With Guests
...