The Prisoner or: How I Planned to Kill Tony Blair

Yunis Khatayer Abbas, freelance journalist, has one hell of a story. On September 23, 2003, American soldiers burst into the family’s house in Baghdad and rounded up Yunis and two of his brothers – a doctor and a student – for plotting to kill British Prime Minister Tony Blair during a visit to Iraq. They were bombmakers, according to the Army, working for “someone out of Fallujah.” The family’s phone calls had been intercepted. The Army believed their intel to be incredibly solid. So not too long after President Bush declared in a national address, “The nightmare that Saddam Hussein brought to your nation will soon be over,” Yunis and his brothers arrived in Camp Ganci, a 4,000-inmate section of Abu Ghraib, their nightmare only beginning. By its end nine months later, the Army had conceded that the Abbas brothers had no “intelligence value” and released them without fanfare. In constructing the narrative, directors Epperlein and Tucker combine traditional interviews with colorful pop-art illustrations, a comic-book motif complemented by a peppy and ironic Sixties superspy soundtrack meant to underscore the absurdity of the supposed assassination plot and Kafkaesque wrongful arrest; moreover, Yunis is a snappy dresser and hotshot reporter who compares holding a camera to holding an RPG, so the movie plays with that idea. Early reviews (including those from its spotlight premiere at South by Southwest this year) praised the film’s artistic audacity, but the scenes with the most emotional punch are those least contrived: a montage of Yunis’ photographs of the fall of Baghdad and the sickening footage of the house raid, captured while Epperlein and Tucker were embedded shooting 2004’s Gunner Palace. These ground-level images are most indelible because they indubitably document the chaos of invasion and occupation rather than reconstruct it subjectively. The very concept of such an assassination isn't so absurd as to be wacky – at least not since somebody fired a rocket at UN Secretary-General Ban Ki-moon last Thursday. Yet the film makes clear its point about the profound failures of justice caused by aggressive attempts at arrests and detention, balancing Yunis’ account with that of Specialist Benjamin Thompson, 391st MP Battalion. “We were supposed to be the soldiers that fixed the problem there,” Thompson says, blinking and gulping. 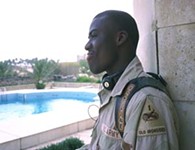 Gunner Palace
Uday Hussein's former pleasure palace is now home to an American artillery regiment, whose members we get to know from their poolside antics to their far more sobering responsibilities of patrolling Baghdad.

The Prisoner or: How I Planned to Kill Tony Blair, Petra Epperlein, Michael Tucker