Color Me Kubrick: A True...ish Story 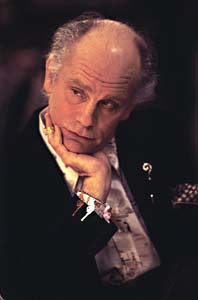 Malkovich, Malkovich, Malkovich. This movie is all about Malkovich lounging in fishnets and pumps, dissolute and reptilian, Malkovich cadging triple brandies from starstruck party boys. “I seem to have left my laser platinum, no-limit American Express VIP card at home,” he shrugs. Entranced, people give him bottles of vodka, hotel hospitality, and Mont Blanc pens; with a flourish, he cosigns a business deal for a wine bar. And why not? They all think his character is film director Stanley Kubrick – who at this point in the “true…ish” story of con man and Kubrick impostor Alan Conway was not yet dead, though he was likely mortified. (Conway and Kubrick died within months of each other in 1998, the film informs.) Besides being bald on top and essentially biped, Conway doesn’t resemble Kubrick, and he knows nothing of his work – a bar hustler tricks him by complimenting Judgment at Nuremberg, which was directed by Stanley Kramer – but, for the most part, he passes, scamming everyone from New York Times theatre critic Frank Rich (William Hootkins, understatedly good) to a lounge-singing protégé (Davidson, overstatedly good). At least at first. Director Cook and screenwriter Anthony Frewin know their Kubrick – Frewin is his former assistant; Cook an assistant director on The Shining, Barry Lyndon, and Eyes Wide Shut – so they drop all kinds of references, the best of which is Conway’s dramatic entrance into a laundrette accompanied by Also sprach Zarathustra. (The front-load washer spins and spins, mesmerizingly.) It’s also a playground for Malkovich – enjoyable enough but not terribly deep, with little illumination of Conway’s behavior. An apparent lifelong liar and alcoholic, Conway seems to draw on his mark's vanity, but the movie rarely pauses for reflection; it just wants to have fun. The structure feels choppy, as well – freewheeling moments of direct address vie with the somewhat sustained subplot of a fashion designer (Mark Umbers) on Conway’s trail – but mostly it’s a pub crawl from con to con. But at 83 minutes, this is a kicky little movie, if ultimately a little too “ish.” AFS@Dobie 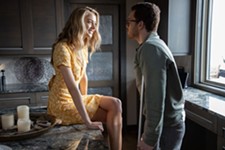