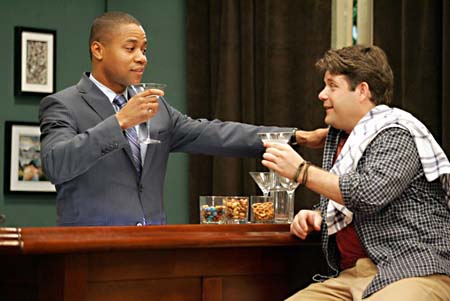 What Love Is is a throwback to the salad days of American independent cinema, a time when filmmakers like Kevin Smith and Richard Linklater were making small, personal movies about the insignificant lives of normal people – no explosions, no car chases, no budget. Just talking. And talking and talking. Writer/director Callahan keeps his characters talking from the first frame to the last, without a break. And fast. In fact, his movie must be up there with His Girl Friday for most words spoken per minute. Of course Cary Grant and Rosalind Russell sustained their verbal machine-gunning amidst taking care of other things: writing copy, bribing officials, saving innocent lives. The characters in What Love Is, on the other hand, have nothing to do but pontificate. And like all great chatterers, from Socrates to Oscar Wilde, their preferred topic is love and all its variations. Men and women, women and men: what they want, what they need, why they’re so crazy. The possibilities are endless. The man with the most to say is Sal (Lillard), a wannabe gangster who, like Vince Vaughn in Swingers, is a semantic alpha male, a misogynist who hides his own insecurities behind a wall of theories, none of which can be disputed because they’re so humorously and well-explicated. He, along with his friends Ken, Wayne, and George (Callahan, Daly, and Astin), comes to the rescue of Tom (Gooding Jr.) after his girlfriend dumps him on Valentine’s Day. Unfortunately, they don’t know how to help, beyond talking his ear off, so they talk his ear off. About relationships, sex, marriage. But mostly about the failings of women. Then Gershon and her crew of girlfriends arrive, and they talk Tom’s ear off. About all of the above. But mostly about the failings of men. In its own peculiar way, What Love Is is a testament to the redemptive power of words. Thankfully, Callahan knows to keep it short and sweet, lest his audience go mad from the noise.