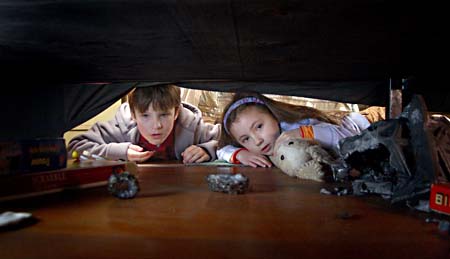 This children’s sci-fi movie should be palatable to the young and old alike, yet it’s ultimately more a mild diversion than a magical adventure. Based on Lewis Padgett’s 1947 short story, “All Mimsy Were the Borogoves,” the film has been updated to include references to homeland security and the PATRIOT Act and various New Age-y beliefs. Nevertheless, the plot raises more questions than it answers and will crumble if poked too aggressively. Good performances (especially by the two child leads and The Office’s Wilson as one’s science teacher) help vitalize the mishmash, however, and make the whole thing a reasonable choice for family entertainment. The story gets going as a brother and sister, while vacationing with their Seattle parents at their second island home, discover a black box in the water that contains strange symbols, spinning artifacts, and a homemade-looking stuffed rabbit named Mimzy. Only 5-year-old Emma (Wryn) can understand the unintelligible sounds Mimzy makes, and her big brother Noah (O’Neil) helps her decipher their meaning while also becoming something of a science whiz. They keep all this hidden from their parents (Richardson and Hutton), which, of course, would end the story right there. After Noah builds a generator and Emma starts levitating, homeland security comes crashing through their front door to whisk the family off to their special research facility. (However, in an unrealistic touch, these goons disappear just as quickly once Mimzy is sent back on her way and don’t show even the slightest interest in studying these “special abilities” kids, à la The Fury or X-Men.) The special effects are extremely tame when compared with state-of-the-art visual voodoo and are likely to disappoint the science-fiction aficionados. Curiously, The Last Mimzy is directed by New Line Cinema’s founder, co-CEO, and co-chairman, Bob Shaye – his first directing foray since 1990’s Book of Love. (Some might recognize Shaye as the archenemy in Peter Jackson’s struggle to direct The Hobbit – an affront to the director whose Lord of the Rings trilogy made New Line a bucket of money.) Shaye’s direction of The Last Mimzy is bland and undistinguished and assures his continued reign as a film executive. 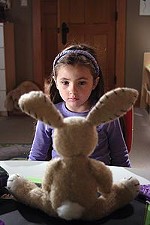