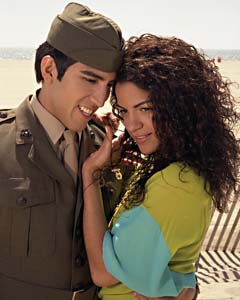 I have to admit, when I first found out I’d be reviewing a movie called G.I. Jesus, I imagined something truly blasphemous awaited me. My mind danced with visions of the Prince of Peace learning how to fire a semiautomatic rifle during basic training or hunting down terrorists in Afghanistan while night-vision goggles tugged at his unruly beard. The possibilities seemed limitless and wonderful. Alas, I’m not that lucky. The G.I. Jesus that actually made it to the screen (rather than the one currently playing in my head) concerns Jesus Feliciano (Arquette), a Mexican national who joins the Marines to gain U.S. citizenship and who returns home to Los Angeles on a furlough from Iraq with a nasty case of post-traumatic stress disorder. It’s an odd little movie – part anti-war film, part hallucination, part domestic melodrama – that at times beautifully captures the fear and paranoia that accompany soldiers home from war but that too often gets muddled in the morass of Jesus’ internal wanderings. Are those Apache helicopters he sees hovering in the California sky real? What about the doctor’s theories about big pharmaceutical companies testing experimental drugs on soldiers? And what exactly is the story with that party at the colonel’s house, the one that starts with Jesus being assigned to lead a mysterious mission in Latin America and ends with a game of (no kidding) musical chairs? Your guess is as good as mine. Ironically, the thing that keeps G.I. Jesus from plunging entirely into incomprehensibility is the only inarguable apparition in the entire film, an Iraqi doctor named Mohammed (Farhad), whose family members Jesus killed and who is now relegated to playing the role of the "Indiscriminate Horrors of War” in the morality play of Jesus’ life. Like some ghastly Jiminy Cricket, Mohammed is the conscience that won’t let Jesus sleep: a chain-smoking reminder that no matter how far you travel or how many family members love you, you can’t outrun your crimes. Jesus of Nazareth may forgive us our sins, but Mohammed of Fallujah isn’t as easily mollified.