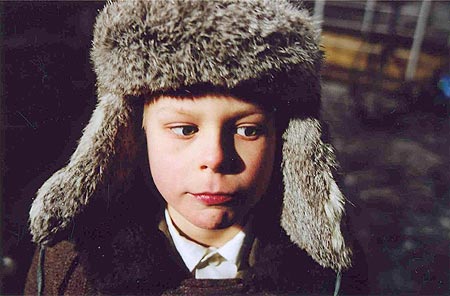 For 6-year-old Vanya, life is about to change drastically. So far, the only world he has known is the inside of a dilapidated, state-run Russian orphanage, where he has lived most of his life. But an Italian couple’s decision to adopt him holds a future for Vanya that few in his situation will ever see. While the other children in the orphanage envy him, Vanya is deeply troubled by the prospect of being taken to live in a foreign country thousands of miles away before knowing the identity of his birth mother and whether she might want him back. That is the heartbreaking scenario of The Italian, the Russian entry in last year’s competition for the Best Foreign Language Film Oscar. Often as bleak in its perspective as the wintry landscapes in which it takes place, The Italian is a variation of sorts on Oliver Twist, in which innocence and hope struggle to maintain an existence in a cold, hard world. Unlike Dickens’ famous orphan, however, little Vanya isn’t a passive pawn whose fate is outside his control; he is determined to make his own destiny rather than allow it to play into the hands of others. Spiridonov’s wide-eyed performance effortlessly captures both the helplessness and the strength of this little fellow – you can’t help but fall in love with the kid. Though the film’s screenplay is set up to follow through on Vanya’s quest to find his mother, The Italian loses some of its intensity once it leaves the claustrophobic confines of the orphanage and takes Vanya on a journey into his past. The narrative lags (and gets a little sloppy at times), with everything becoming more and more focused on whether mother and son will be reunited. Without giving the ending of the film away, however, it must be said that the manner in which director Kravchuk resolves things is disappointing, to say the least. (Indeed, some viewers may not even be sure what happened.) Why go to such trouble to build up the against-all-odds storyline, only to resolve it in such a vague, truncated way? Other than the unsatisfactory ending, however, there’s much that is commendable in the The Italian, not the least of which are its social criticisms of the buying and selling of children through the adoption businesses currently thriving in Russia and neighboring eastern European countries. In some respects, unfortunately, not much has changed since the world was introduced to little Oliver Twist nearly two centuries ago.