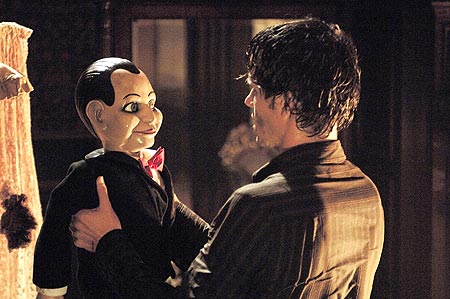 You've got to hand it to writer/director Wan: His hypersadistic Saw films, along with those of fellow gorehound upstarts Eli Roth and Lucky McKee, are, for better or worse, revitalizing the cinematic tradition of American Grand Guignol. All three directors are such patent horror geeks that if it weren't for timeless popularity of the genre – little is ever certain outside of death, taxes, and evergreen cinematic purr of chainsaw lullabies – they'd probably be out doing something knifey to that postcoital couple down the block. But horror, unlike Lucio Fulci, lives and thrives in these tense times, and Dead Silence, while unlikely to make anybody's Top 10 list, is still a kicky exercise in spook-show atmospherics that manages to hit all the right notes while never quite coalescing into the Dario Argento-esque aria of creepiness it so clearly aspires to. Leading man Kwanten has all the onscreen charisma of a soggy cobweb, but as the willfully dopey, utterly bland husband who finds himself in possession of a murderous ventriloquist's dummy, he fits in nicely alongside Argento's vague and vacuous protagonists (think of hapless Leigh McCloskey in Inferno). Dead Silence feels like a Seventies Euro-shocker refracted through a much larger budget than Mario Bava or Paolo Cavara ever had. It also wears its antecedents on its hoary sleeve; aficionados of Italian horror will spot references to "The Drop of Water" segment of Bava's orgiastically hued Black Sabbath, and the whole of the film echoes, particularly, Argento's crimson couture and penchant for outrageous, violent set-pieces. That said, Wan is no Argento (as of yet), and Dead Silence, despite the presence of a downright nasty-looking manikin, is no Deep Red. Working from a script co-written with Saw partner Leigh Whannell, Wan does manage to infuse his film with some of the subtle unsubtleties of classic Euro-horror outings, chief among them the palpable, dreamlike sense of dislocation and the abiding severance from reality that tends to make nongenre fans wonder if someone spiked their popcorn with LSD.