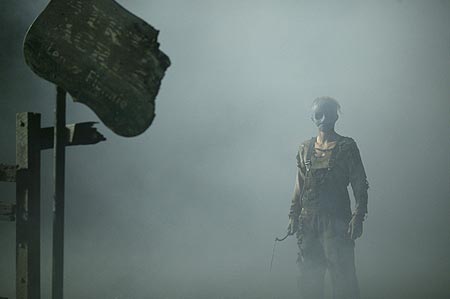 Behind the Mask: The Rise of Leslie Vernon

A wickedly entertaining postmodern take on the hallowed, Eighties-era slasher flicks peculiar to American cinemas, Behind the Mask is a faux documentary centered on the title character, played to the blood-flecked hilt of his rusty, old hand scythe by Baesel. Set in a contemporary world where hometown maniacs like Michael Myers, Freddy Krueger, and Jason Voorhees are very much alive, or dead, or undead (and if those names don't ring a funereal bell in your head, this likely isn't the mockumentary for you), Behind the Mask (which had its world premiere at SXSW 2006) uses the increasingly familiar trope of a documentary camera crew that follows the titular character throughout his preparations for his debut killing spree, allowing us entrée into the inner workings of the allegedly supernatural serial killer's mind, motivation, and technique. The latter comes up for some serious skewering: As Baesel plays him, the ingratiating proto-slasher Leslie Vernon resembles nothing so much as a giddy, witty, cardio-pumped theatre nerd with a pocketful of doom in lieu of the usual, you know, stardust. (Even his regulation spooky mask resembles a Cabbage Patch version of the theatre's iconic inverted smile of Tragedy.) With an equally game grad-student journalist (Goethals) and her sound and camera crew in tow, Vernon enthuses over his chosen virginal victim (Carlson) and demonstrates the mountains of preplanning that go into forcing hormone-crazed teens to make all those seemingly natural (if ultimately foolhardy) choices, such as going into pitch-black basements or using second-story windows as horror house exits. Director Glosserman, working from a script co-written with David J. Stieve, occasionally hits heights of satiric brilliance even Christopher Guest might envy, as in one early sequence that has the oddly endearing madman stalking his quarry in an appropriately gloomy library ("Look at him go!" enthuses an awestruck cameraman. "He's like a little monkey!") For all its postmodern theorizing, genre fans will recall that similar feats have been done before, and better – specifically in Dutch filmmakers Rémy Belvaux and André Bonzel's 1992 film, Man Bites Dog, which, while less polished (suitably so) than Behind the Mask, effectively presaged everything from the astonishing popularity of what what we now call "reality television" to the whole meta-pomo-pop-culture mindfuck that's currently doing double duty as both American reality and its televised mirror shade. The post-post-postmodern ur-gag behind Behind the Mask is that Leslie Vernon, psychopath, isn't even a genuine person within this fictional world. He's actually an egotistic preener originally hailing from Reno, Nev. (which, if you've been to that now-official methamphetamine capital of North America, doesn't seem like much of a stretch at all). It's a smart gag in an even smarter movie, a poke in the eye of genre convention with a flensing blade and a disarmingly charming razor-blade grin.