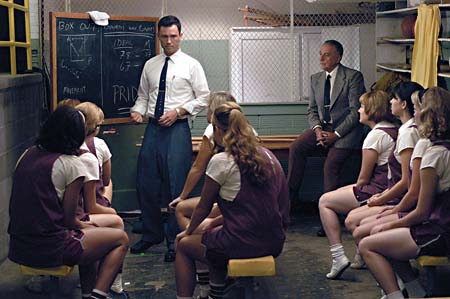 A few years ago, ESPN released its list of the best sports movies of the last 25 years. At the top of the list, in all its inspirational glory, was Hoosiers, David Anspaugh's classic story of redemption and basketball in small-town Indiana. Argue if you will with the judges' choices (Bend It Like Beckham is better than Rudy? No Hoop Dreams?), but it's a testament to just how worthy Hoosiers is of that top spot that so many of the other films on the list follow its storyline like holy writ: A coach comes to a team that either he doesn't want or that doesn't want him; his unconventional techniques, implacable demeanor, and devotion to hard work and discipline run him afoul of the local nabobs; one by one, the townspeople jump on the team's bandwagon when they start winning, which they do a lot of. Believe in Me makes no secret of the debt it owes to Hoosiers; in fact, it's not above stealing from that movie wholesale when the occasion calls. Its opening title sequence, in which high school hoops coach Clay Driscoll (Donovan) drives through the Oklahoma plains at dusk, passing basketball hoops nailed to the sides of barns as he goes, is almost a shot-for-shot retread of Gene Hackman's magic-hour, opening-title drive through the Indiana countryside. Fair enough. If you're going to steal, you might as well steal from No. 1; pilfering from Finding Forrester (No. 19) or White Men Can't Jump (No. 13) wouldn't make nearly as much sense. Based on the story of real-life Oklahoma high school basketball legend Jim Keith, Believe in Me follows Driscoll to the rural town of Middleton, population 3,433, where his first head-coaching job awaits him. The only problem is that when he arrives, the position with the boys team is already spoken for; he'll have to make do with the girls, or he'll have to find another job. At first, Driscoll is indignant. Like everyone else in town, he knows girls can't play basketball; they're meant to stay at home, washing overalls and sewing patches onto gingham shirts. The team's first practices do little to prove Driscoll wrong; the ladies may giggle and squeal with the best of them, but they have no luck when it comes to dribbling and shooting. Eventually, though, and inevitably, coach has his team whipped into shape, running three-man weaves and layup drills like they're the '84 Celtics, and before you can say "Cinderella story," the Lady Cyclones are on their way to the state championship. The inspiration in Believe in Me comes early and often, and writer/director Collector never misses an opportunity for a heartfelt locker-room speech or joyful practice-session musical montage to tug at viewers' heartstrings. But despite all its clichéd moralizing and blatant borrowings, the movie does offer a few clever twists on an old formula. Hoosiers may have been a better film, but Hackman never had to coach a team to victory after his star player quit to go have a baby. 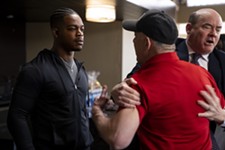