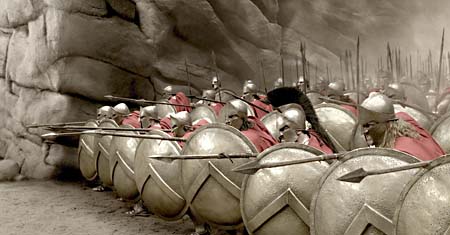 The sword-and-sandals genre is one of the few that has been overlooked by Hollywood in recent years. Even Tarzan's gotten more of a workout in the past three decades than his old matinee sparring partner Hercules or Jason's fabled Argonauts. Thankfully, the quick thinkers over at Warner Bros. glommed onto this discrepancy and lassoed Snyder (director of the grossly underrated Dawn of the Dead remake) and the entire cast of Chippendales on Ice to address this egregious oversight by adapting the graphic novel 300 by not-so-funny-pager Frank Miller (Sin City, DC Comic's Batman: The Dark Knight Returns). Miller's original story (which won three Eisner Awards for, I believe, Excellence, Coolness, and Dude, That Fucking Rocksness) nipped an idea or two from both Rudolph Maté's 1962 proto-sand fight The 300 Spartans and Homer's The Iliad, which most Americans of a certain age once read at the point of a spear or received a B-plus in AP high school English. Miller's comic updated the legendary battle of Thermopylae in 480 BC, during which King Leonidas of warrior-state Sparta (here played with just the right amount of humorless gusto by lantern-jawed Butler) and 300 of his best fighters squared off against the million-man-strong armies of the Persian god-king Xerxes (Santoro, channeling Arnold Vosloo by way of Liberace) and very nearly won the day, thanks to some cunning battlefield strategizing and the then-original combat tactic known as the phalanx. Both Miller and Snyder's cinematic adaptation are bloodthirsty affairs for ex-sanguinary times. Onscreen, buoyed up to and past Mount Olympus by some of the most flawlessly integrated visual effects yet created and a script that takes itself, as it should, very seriously, 300 is an action film lover's wet, crimson dream, awash in spectacle (Xerxes' ships are dashed upon the rocks during a fierce hurricane before disgorging what looks to be several million of Saruman's rejects from The Lord of the Rings) and set to a terrific, rumbling score by Tyler Bates. Not since Mario Bava's Hercules in the Haunted World has Greco-Roman movie-house mythmaking been so thoroughly well-conceived and executed. Cinematographer Larry Fong (Hero) brings Miller's visceral, instantly identifiable splash pages to bloody life and loses none of the author's trademark visual kineticism in the transfer from page to screen. On the geopolitical military tip (and ancient Greece was nothing if not geopolitical), it's notable that these 300 bearded die-hards, attempting to repel shockingly awesome numbers of foreign usurpers from the lands beyond beyond, resemble nothing so much as an intractable insurgency willing to sacrifice everything up to and including their own lives. The parallels between American foreign-outreach programs and those of 2,400 years ago are too obvious to miss but in the end have very little to do with Snyder's film. War is, after all, Hades, no matter what the battlefield is.