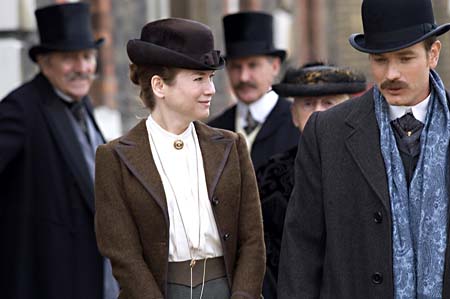 In 1902, a 36-year-old spinster and painter of greeting cards and botanical diagrams named Beatrix Potter published The Tale of Peter Rabbit, a modest, delicately illustrated children's book that has since gone on to sell more than 40 million copies worldwide. Not bad for a single girl living in London. In Miss Potter, which starts just as that book is being accepted by the publishing house of Frederick Warne & Co., Zellweger plays Potter as a creative space cadet, lost in her own world and most content when she's alone in her room, drawing animals and talking to them as if they were real. (That she actually thinks they are seems to trouble no one in her life.) Her representative at Warne & Co., Norman Warne (a wide-eyed, thickly mustachioed McGregor), is the biggest fan of both the book and its author, and the majority of Miss Potter is the story of their slow, deliberate, Victorian courtship: demure in nature, accented here and there with light touches and meaningful looks, but stifled at every turn by the imposing social rules and familial responsibilities that defined that corseted age. Beatrix's mother (Flynn, channeling Margaret Dumont) won't have her daughter marrying a mere tradesmen (they "carry dust," don't you know), especially after all the trouble she's gone through to parade a cast of worthy society men before her daughter's skeptical eyes, only to see each of them rejected in turn. Amid this social drama, Beatrix publishes book after book, becoming rich and famous while introducing the world to Squirrel Nutkins, Mrs. Tiggy-Winkles, Jemima Puddle-Duck, and a dozen other characters that have been floating around in her vivid, not untroubled imagination since she was a child. Warne's gushings about Miss Potter's stories – "enchanting," "delightful," he sings of them over and over again, with a growing glint in his eye – could just as easily be used to describe this movie; at least that's what the filmmakers are hoping for. Miss Potter aims to be "enchanting" and "delightful" and "charming" and all those other adjectives that flow so easily from critics' pens when they're discussing independent movies of a particularly sweet British bent, but it never quite hits the mark. Which is not to say it's a bad movie, but you can see it sweating to be the kind of critical and public darling that movies like Finding Neverland, Sense and Sensibility, and Four Weddings and a Funeral managed to be with half the effort. The film has just the right amount of English wit in its script and pizzicato violins in its score to make its viewers feel both intelligent and cozy, but the story lacks the dramatic tension and sense of purpose to elicit any more of a response than that; plus, it leaves the meaty issue of Potter's questionable sanity maddeningly unexplored. Miss Potter is, in the end, a confection, a trip through the imagination on gossamer wings. Enchanting, perhaps, but a long, long way from meaningful. Babe
A pig finds his destiny – and it's not as Christmas dinner.