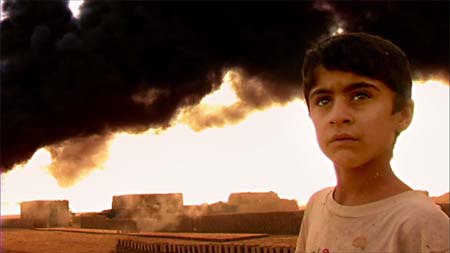 If you don't really understand the phrase "sectarian violence in Iraq," please see this documentary by the maker of 2002's Gaza Strip. It will show you what sectarian violence means for the people of Iraq, some of whom we meet. Eleven-year-old Mohammed lives in a bombed-out industrial section of Baghdad where buildings smolder without attracting notice. While the neighborhood's men politick over coffee ("Why don't they just take the oil and leave us alone?"), Mohammed attempts to attend school. The film's second section – in some ways its most miraculous – follows members of Moqtada Sadr's Mehdi Army through ceremonies, prayer, political meetings, and a raid on flea marketers selling alcohol. "We've returned to Saddam's time again!" laments one, after he's been beaten and abducted; later we'll see an irritated wife negotiating for her husband's release from captivity. The last segment travels north to the place that would be Kurdistan, where brick-baking villagers welcome their first general election. According to the press materials, Longley shot 300 hours of footage in Iraq between February 2003 and April 2005. He writes, "There was no government in Iraq, and I could film whatever I wanted as long as I could stay alive." There is no apparent reluctance on anyone's part to be photographed, including the radical Shiites; Longley's unofficial, unembedded perspective seems to have inspired trust among various people bitterly, and not without reason, distrustful of Americans. Longley doesn't practice the Pennebaker method of fly-on-the-wall documentary, so viewers who expect a photojournalistic approach to a nonfiction topic may find Longley's use of subjective camera jarring. (We see Mohammed's abusive boss from cowering low angles, for instance.) The technique is more expressionistic than naturalistic, but it makes the film far more vivid and emotionally satisfying – more like being there, among regular people, in the Iraq that has been created by sanctions, despotism, military invasion, occupation, and ancient cultural, ethnic, and religious divides. Yet the Sundance award-winning and Oscar-nominated film makes these connections obliquely, through its storytelling, and offers more questions than answers. Even the Kurds, who seem the closest thing to a success story, long for a unified Iraq.