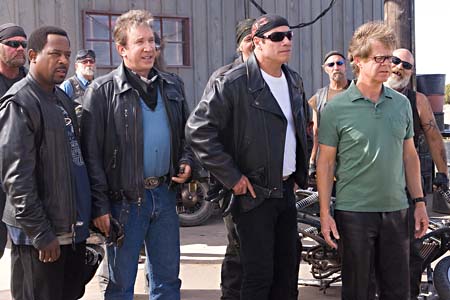 With his doughy face and oversized features, Travolta seems like a giant puppet these days. The lanky stud from Urban Cowboy and even the cool killer from Pulp Fiction are hazy memories amid his over-the-top performance from the school of freak-out acting. Sadly, in this mediocre comedy, Travolta stands out as not only the most mediocre but the most annoying as well. The story of middle-aged suburban professionals seeking life’s purpose on a cross-country motorcycle trip is your basic formulaic Hollywood comedy. Four friends, Doug (Allen), Woody (Travolta), Bobby (Lawrence), and Dudley (Macy) make up the Wild Hogs, a group of bored suburbanites who engage in a weekly motorcycling ritual that involves leathering up, riding around, and drinking beers. When Woody’s enviable life (which includes a swimsuit-model wife and successful career) falls apart, he encourages the guys to mount their hogs and ride to the coast. As the wannabes set out in search of true freedom, the expected troubles arise in the form of tents burning to the ground and a run-in with an actual biker gang known as the Del Fuegos. The leader of said bikers, Jack (Liotta), quickly develops a vendetta against the foursome when Woody “accidentally” blows up their bar. As a result, every greasy meathead from central casting is enlisted in a desperate chase to track down and destroy the Wild Hogs. When the Hogs hide out in a roadside town that is frequently attacked by the roaming Del Fuegos, they’re forced to face their fears and protect the town as the film becomes yet another retelling of the Kurosawa classic Seven Samurai. But despite this lineage, Wild Hogs remains firmly rooted in the lowbrow. The writer (Brad Copeland, seasoned from TV’s Arrested Development and My Name Is Earl) combines some good comedy, usually involving Lawrence, with weak comedy, usually involving poop (both bird and human). And a note to screenwriters everywhere regarding characters over 50 whose inability to use the Internet results in being trapped on a porn site (see Wild Hogs and Because I Said So among others): It’s not funny; please stop doing it. The only really laugh-out-loud moment occurs when Kyle Gass (one half of Tenacious D) dances around on a plywood stage in a glittery shirt, belting out, “Don’t cha wish your girlfriend was hot like me?” It’s comedy gold amidst a lot of coal. 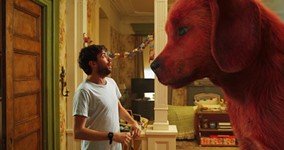 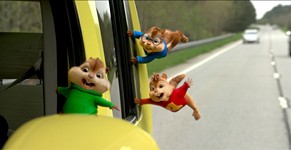