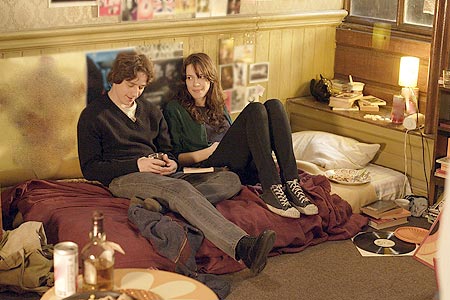 The suddenly ubiquitous McAvoy (The Chronicles of Narnia, The Last King of Scotland) here has a starring role as Brian Jackson, a young man from a British coastal town whose first year as a student at Bristol University becomes the stuff of coming-of-age drama and romantic comedy. For the most part, it’s all fairly predictable material, although McAvoy and his costars invest the movie with dynamic performances that manage to keep the story’s characters just this side of stereotype and mediocrity. The amiable film was written for the screen by David Nicholls and based on his eponymous novel and directed by first-timer Vaughan, who studied drama at Bristol U. along with Nicholls during the mid-Eighties – the 1985-86 time period during which Starter for 10 takes place. Vaughan’s career as a maker of short films was twice honored by having one of his films selected to screen along with the British theatrical release of two of Richard Linklater’s films: Dazed and Confused and subUrbia. Perhaps this explains why Picturehouse, the American distributor of Starter for 10, has chosen the unusual pattern of premiering the film exclusively in New York, Los Angeles, and Austin. Starter for 10, which also screened at the 2006 Austin Film Festival, is also notable for its music-heavy soundtrack, which features era-appropriate New Wave tunes by the Cure, Wham!, Tears for Fears, New Order, and so on, which might up the film’s appeal in music-savvy university towns. Surely, this is part of what attracted co-producer Tom Hanks to the project, who must have noted the film’s spiritual similarity to his first directing project, That Thing You Do! – a period film about coming of age to the rhythm of a strong musical backbeat. As enjoyable as the soundtrack may be, Starter for 10 relies too heavily on the music to establish its sense of time and place. The economic realities of Margaret Thatcher’s England are a faint backdrop, as are the class distinctions that are so intrinsic to Brian’s problems. Although McAvoy seems about a decade too old to be playing a college student, he nevertheless imbues Brian with gently callow charm that makes evident why the two girls he vacillates between put up with his foolishness. Alice (Eve) is a blond, upper-crust WASP who toys with Brian’s affections; Rebecca (Hall) is a brunette Jew, whose political passions keep her dashing from demonstration to rally. While Brian bounces between paramours, the plot is driven by his preparations for competing in the televised show University Challenge (the British version of College Bowl – the American TV show that ran throughout the Sixties). The phrase “starter for 10” is something said by the show’s contestants. Obviously hoping for some John Hughes-for-the-college-set magic or Slacker-like momentum, Starter for 10 is short a Madonna Pap smear or two. However, youth sensation or not, Starter for 10 deserves to graduate – just not at the head of the class. 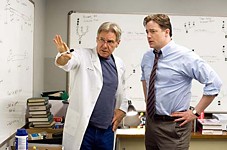 Extraordinary Measures
Brendan Fraser and Harrison Ford play a parent and a scientist who fight time, man-made obstacles, and each other to find a cure for a rare childhood disease. 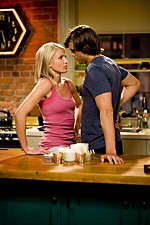 What Happens in Vegas
Cameron Diaz and Ashton Kutcher – two Hollywood actors known for their prankishness and pluck – never manage to convince us that this Sin City comedy is fun.