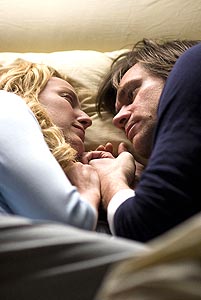 What is there to say about a movie that teams Schumacher with Carrey other than that you deserve whatever you get if you go and see it? After all, this isn’t Howard Hawks and Cary Grant we’re talking about. One is a director whose collected works (including Phone Booth and Batman & Robin) are proof that Hollywood is on a big-budget path straight to hell. The other is a rubber-faced clown whose brilliant showing in Eternal Sunshine of the Spotless Mind is looking more and more like a one-time fluke in an interminable career that seesaws back and forth between puerile comedy and Oscar-chasing melodrama. If my calculations are correct, together they should be capable of creating a film that’s all but unwatchable. Witness The Number 23, a tale about an ordinary guy named Walter Sparrow who stumbles upon an extraordinary book that introduces him to the mystical power of 23, a number that, apparently, has been revered for ages by conspiracy theorists and other nut jobs as a source of terrifying, destructive power. “Look,” they howl, “at how the number keeps popping up when you study Hitler’s birthday or the prognosticated date of Armageddon in the Mayan calendar or Michael Jordan’s jersey.” The book Sparrow becomes obsessed with (cleverly subtitled “a novel of obsession”) concerns a dangerous woman, a murder, and a man with a past remarkably similar to Sparrow’s, and, as if the main story line weren’t insufferable enough, Schumacher forces us to sit through dramatic re-enactments of the book’s plot, which are shot like a bleached-out New Wave video from the early days of MTV and star Sparrow as a hard-boiled, hypersexed detective named Fingerling who’s trying to solve a murder he may or may not be responsible for and who – wait for it – plays the saxophone. The saxophone! While gazing out the window of his seedy apartment no less! Unbelievable! There are no words to describe the sensation of watching Carrey sweat and strain to play a tough guy; there is only the stunned awe one usually reserves for witnessing natural disasters or the Grammys. Of course, Schumacher is as much to blame for this mess as Carrey is. Over and over again, he mistakes looming shadows and manic outbursts for tension, and his ponderous, ham-fisted directorial style creates more questions than it answers. Why, for example, if Sparrow is so obsessed with this book, does it take him days to read it? It’s a hundred pages long, for chrissakes. Okay, that may be a problem with the script, so blame the screenwriter as well. Blame New Line Cinema while you’re at it. And the Lumiere brothers. Hell, blame Michael Jordan if you want to. 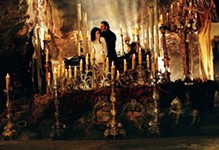 Andrew Lloyd Webber's The Phantom of the Opera
The plodding stage musical finally comes to the big screen, its relentlessly bombastic score intact with a vengeance.