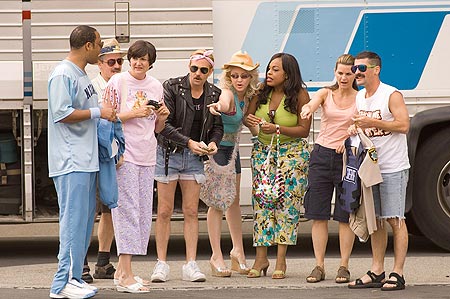 Not having cable, I had no knowledge of Comedy Central’s unscripted Cops parody beyond its rise from the ashes of Viva Variety and The State. So I saw this big-screen blowup at the Drafthouse, and thanks to the clips before the previews, I can state confidently that there is nothing here as funny as that time Deputy Garcia (Alazraqui) clubbed a mime for impersonating him or as funny as the scavenger hunt with passes to an execution as its prize. I rather wished the clips had kept going. You still get the bit about Lieutenant Dangle (Lennon), the leader in hot pants, slamming into other cars whenever he takes off, and Chris Tallman (Gary the Klansman from the series) turns up for an alligator gag that’s okay. But adapting a sketch-comedy project to a feature requires the invention of a story arc that is sustained and satisfying in its resolution, even if it is silly (imagine, if you will, The Blues Brothers), and writers Garant, Lennon, and Kenney don’t have one. There’s a gimmick to move the gang to Miami, followed by a gimmick to sicken all the other cops in the area, resulting in the gimmick of the Reno sheriff’s deputies keeping law. Lots of guests from the show pop up, doing one thing or another: Patton Oswalt as the weaselly deputy mayor, Paul Rudd as a drug lord, Nick Swardson as roller-skating hustler Terry. Is it funny? It can be. I loved the part where the Rock arrived to save the day but accidentally blew himself up with a grenade. But a series of setups does not a movie make, even if they total 84 minutes. It makes for an overlong television episode with the wrong kind of pacing. (The same peril befell Wet Hot American Summer, another State joint comprising good improv in a series of setups that did not a movie make.) Moreover, the filmmakers assume familiarity with the show’s documentary premise and in-jokes (e.g., Deputy Garant giving all his commands in French), which will make the movie even less accessible to novices. 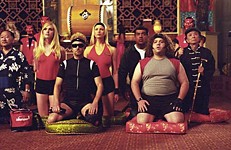 Balls of Fury
Goofy pingpong comedy gets by on the amiable nerd panache of chunky lead Dan Fogler. 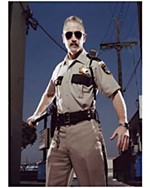 Reno 911! Miami With Carlos Alazraqui Live
The man who plays Officer Garcia in the comedy ensemble will perform stand-up prior to the two screenings on Saturday night. ...