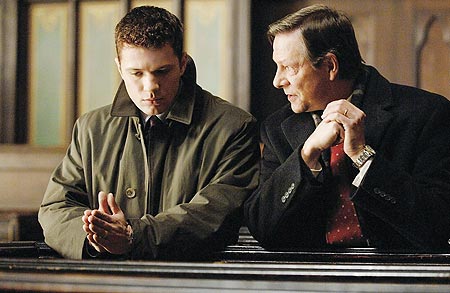 Is there an actor working today who looks more spent than Chris Cooper? With his rumpled demeanor and those giant bags under his eyes, the man looks perpetually tired. Tired of his lot in life, tired of all those slings and arrows, but most of all, tired of knowing he’s smarter than everyone else in the room. His is the exhaustion of contempt. A trait that serves him perfectly in Breach, in which he plays Robert Hanssen, the brilliant real-life FBI spy whose exploits as a double agent during and after the Cold War led to the deaths of as many as 50 government agents and sources. It’s the mole story to end all mole stories. (In the film, a special agent played by Linney calls Hanssen the “worst spy in American history.” This is a misnomer, of course; if he were truly the worst spy in American history, he would have spent his years at the FBI forgetting his code names and spilling coffee all over the agency’s most expensive gadgets. Let’s go with the “most sinister spy in American history,” for clarity’s sake.) As Hanssen’s foil we get Eric O’Neill (the lightweight Phillippe), an ambitious FBI upstart assigned the task of covertly sounding out Hanssen and bringing back evidence that proves he’s as treasonous as everyone says he is. At first, O’Neill is put out by the assignment, judging it to be beneath his talents, but as the severity of Hanssen’s crimes becomes clearer, and as Hanssen proves himself to be rather clever quarry, the callow operative sinks deeper and deeper into his work, putting both his life and his marriage in jeopardy in the process. If there’s one thing I’ve learned from movies recently it’s that it’s no fun being the wife of a spy. Witness Angelina Jolie in The Good Shepherd and now Dhavernas in Breach: The role of an agent’s wife is a long-suffering one, full of cold dinners, wringing hands, and a total lack of understanding as to what your husband really does when he goes off to work in the morning. Someone needs to make a movie about them. I’d love to know if they spend their entire day biting their nails while staring off into the middle distance in unlit rooms or if they save that move for when their husbands walk through the front door hours, even days, late, without so much as a phone call. (Jim Jarmusch, that great minimalist, would have a ball with such a movie. Inasmuch as Jim Jarmusch is capable of having a ball.) These days it’s going to take a pretty exceptional political thriller to top our political reality for sheer suspense and treachery, and though director Ray (Shattered Glass) provides a few choice moments of psychological tension, nothing in his film can hope to outpace the anxiety caused by the appearance of former Attorney General John Ashcroft in its opening scene. Terrorwise, it’s all downhill from there. 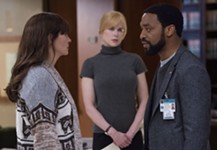 Secret in Their Eyes
Chiwetel Ejiofor, Julia Roberts, and Nicole Kidman in a twisty drama 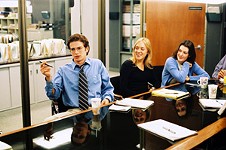 Shattered Glass
Before Jayson Blair there was Stephen Glass, a fabricator of magazine stories, whose fall from grace is told here.