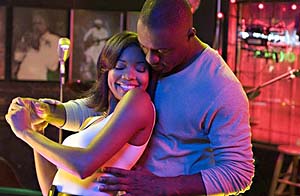 As a white northerner with a weakness for strange arthouse movies, I’m not quite producer/writer/director Perry’s target audience. Aimed primarily at African American filmgoers, Perry’s oeuvre is known for explicit Christianity, melodrama, and sappy comedy. As a result, I entered this moviegoing experience ready for a lot of wincing and eye-rolling. But dammit if this movie didn’t make me laugh and cry. Despite the fact that Perry indeed relies on contrivances and sentimentality, he does manage to spin a good yarn in the process. It’s not often that a person becomes a brand. But as a playwright, actor, and filmmaker, Perry (who recently expanded his reach with TV’s House of Payne) has built a virtual empire. With Daddy’s Little Girls, Perry shelves the prosthetic makeup of Madea’s Family Reunion (not to mention the five plus other Madea movies) but keeps the romantic fable that’s been present in all his work. The film follows Monty (the engaging Elba), a struggling mechanic with three daughters (the very funny McClain sisters) and a rather evil ex-wife (Smith) who happens to be married to the neighborhood crack dealer (Sturgis). When his ex-wife decides she wants custody of the kids, drama ensues and Monty is forced to take on an extra job as a chauffeur. Enter Monty’s first client, Julia (Union), an uptight, overworked attorney. Sparks fly between our heroes when Julia steps in to represent Monty in his custody battle. Manipulating his audience with melodramatic music, over-the-top plot developments, and heavy-handed comedy turns, Perry could never be accused of subtlety. But the man knows how to push some buttons. Amidst the melodrama, a genuine love of character and place emerges. Plus, there are some pretty funny jokes. Unflinchingly addressing issues of class and race, Perry juggles multiple plot lines and the result emerges as (dare I say?) a surprising mix of Frank Capra and Douglas Sirk. When Monty’s boss (the compelling Gossett Jr.) launches into a speech to rally the community about the history of African-Americans as a people, I found myself nodding through watery eyes. Sure, it’s easy to wonder how on earth a man who dresses up like a bossy fat woman and parades around in his own campy morality tales could possibly be so successful, but there’s a reason for everything. And this time, it’s that Perry is actually a good storyteller.