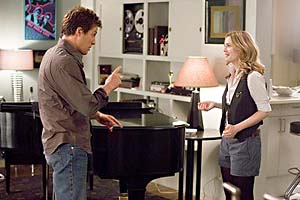 If there’s one thing you can be sure about after watching Music and Lyrics, it’s that Hugh Grant definitely waxes his chest. The crown prince of romantic comedies cuts his shirt deeply to the navel in this newest addition to the pantheon of entertaining but inconsequential Hollywood pandering. Grant plays Alex, a former member of the fictional Eighties band Pop!, a thinly veiled Wham! homage. These days Alex’s fan base is relegated to county fairs and amusement parks. But thanks to his nostalgia cachet, Alex is asked to write a song for the latest Britney-esque sensation, Cora Corman (newcomer Bennett). With only days to generate a hit, Alex enlists the lyrical help of his quirky new plant lady, Sophie (Barrymore). Music and Lyrics obediently follows the rules of a romantic comedy, and because these rules were laid out by years of masterful craftsmanship (Preston Sturges and Frank Capra, anyone?), there’s power in the pedigree. But writer/director Lawrence (Two Weeks Notice) colors neatly within the lines and produces a film that’s as safe and comforting as it is uninspiring and predictable. The opening credit sequence, consisting of Pop!’s music video, is by far the funniest part of the film. But unfortunately, the rest of the movie doesn’t follow suit. With excessive comedy mined from simply having Grant repeat the words “Knott's Berry Farm,” I couldn’t help but wish for more. Though Grant and Barrymore both perform adequately, the rest of the cast includes Johnston (TV's 3rd Rock From the Sun), who mugs through weird, unfunny jokes that involve the emotional abuse her husband, and Scott (The Secret Lives of Dentists), who makes a strange appearance in a subplot that was a lot more interesting the first time I saw it on Six Feet Under. Garrett (Everybody Loves Raymond) is endearing as Alex’s agent, and Bennett is frighteningly spot-on as Cora. Her screwy “spiritual” interpretations involve an enormous Buddha, rows of scantily clad “monk” dancers, and the even more scantily clad Cora as the object of their adoration. The result is either a brilliant bit of idol worship satire or a sign of the apocalypse. Despite the sad fact that audiences will surely settle for this watered-down, kind-of-funny attempt at the genre, I couldn’t help but enjoy the ride a little. I mean, who doesn’t want some love and romance, especially if it’s indulgent and totally unbelievable? 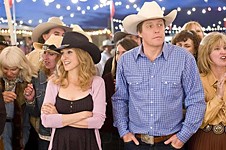 Did You Hear About the Morgans?
Hugh Grant and Sarah Jessica Parker play a feuding New York City couple who rediscover their love while out West.