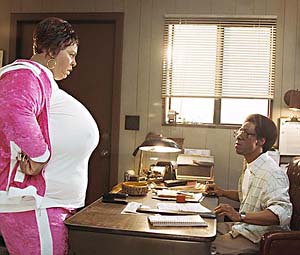 Murphy doesn’t just put on a dress this time around in playing the grossly obese Rasputia in Norbit – his wardrobe changes run the gamut of bad taste, ranging from a hot-pink velour sweatsuit to a fuschia two-piece bathing suit that will sear itself into the nether recesses of your memory. Actually, it’s not so much the clothes that make Rasputia as it is the mounds and mounds of flesh that surround them. This is a character that literally fills the screen. If you don’t appreciate the vulgar pleasures of broad comedy, the ongoing fat joke in Norbit will likely strike you as misogynistic and mean-spirited, which may not be too far off the mark. Unlike the female characters Murphy portrayed in The Nutty Professor and its sequel – the nurturing Mama Klump and the perpetually horny Granny Klump – Rasputia is purposely one-dimensional in the way she terrorizes her dweeb husband, Norbit (Murphy again), and everyone else within distance. (Even children and dogs aren’t safe around her.) While Rasputia’s blind-rage tantrums can be pretty funny stuff – you can tell that Murphy is clearly having a ball, twitching and jabbering prior to one of her tirades – there’s little here to pull you into the storyline and elicit your sympathies for poor Norbit’s marital predicament. Consequently, a rekindled romance with his childhood sweetheart (a too thin Newton) comes off as fake and even more extraneous than the romantic subplots in the Klump movies. As in those films, however, the fun in Norbit is watching Murphy at work – the guy has a knack for bringing the physicality of his comic characters to life. He plays three roles here, including Norbit’s adopted father, a stubborn Chinese immigrant with no sense of political correctness, and they’re all fully realized in the physical sense but sadly lacking otherwise. It’s too bad that the script doesn’t serve Murphy’s multicharacter talents in the way he deserves. If and when it ever does, he may actually make a comedy for the ages.