Writer Thomas Harris, creator of legendary Hollywood sociopath Dr. Hannibal “the Cannibal” Lecter, has been asked countless times over the last 25 years how it was his hero came to be a monster. Apparently readers and viewers aren’t satisfied with the hours of gruesome fun Hannibal has provided them; they want to get the good doctor on a leather couch and peel back a few layers: “Tell me about your mother, Dr. Lecter.” Well, as the man said, when the gods wish to punish us, they answer our prayers, and now Harris has given us our answer: Hannibal Rising, an uninspired and altogether unnecessary biography of a madman. When we first meet him, Hannibal is just an average boy of 7 or 8, passing a happy hour with his beloved little sister, Mischa (Tachovska), outside their family’s castle in Lithuania during the winter of 1944. Times being what they are, however, and Lithuania being where it is, the Lecter family estate is quickly becoming a battleground for Hitler’s and Stalin’s armies, so that hour is cut short by air strikes and tank assaults. Within the first 10 minutes of the movie, Hannibal and Mischa’s parents are killed, and the two children are taken hostage by a band of sinister, growling Lithuanian bandits. Long story short: The winter grows long, the food runs short, the bandits get hungry, Mischa starts to look more and more like a giant turkey leg, and, in the end, poor Hannibal is left without a sister, replaced by a deep well of boiling hostility. Upon escaping to France eight years later – troubled all the while by nightmares and an unnatural affinity for sharp metal objects – he begins the long, hard slog toward revenge. Revenge? That’s the answer? How unimaginative, how unsatisfying, how entirely unlike our Hannibal. Surely the roots of that madman’s bloody, fleshy desires run deeper than mere neuroses and childhood trauma, down into the realm of severe asocial neurological dysfunction. That’s the Hannibal Lecter Anthony Hopkins presented so deliciously in The Silence of the Lambs, and his near-operatic pathology was the reason we kept watching through two sequels. Unfortunately, Hopkins is nowhere to be found in Hannibal Rising. Instead we get Ulliel, an elegantly chiseled cipher with minimal acting talent and a laughable accent that would make a late-night TV creep-show host blush (“Good eeeeeeveniiing,” he oozes, like a B-movie Dracula). All the seductiveness is gone from Hannibal, as is the riddle behind his motivation, and what remains is the whining of an adolescent with a taste for human flesh. By erasing all the mystery from Lecter’s past, Harris and director Webber have also stripped him of his ability to terrify (who’s going to lose sleep if he noshes on a few Nazis?), and their film, though gory and violent enough, is almost entirely devoid of shock or suspense. Who would have thought mass murder and cannibalism could be so dull? 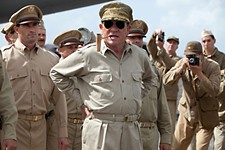 Emperor
Tommy Lee Jones is Gen. Douglas MacArthur and Matthew Fox his adviser in this historical drama set in postwar Japan in which the general must decide the fate of the Japanese emperor. 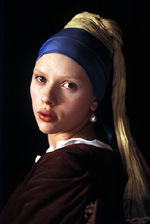 Girl With a Pearl Earring
Bona fide "art" movie starring this season's It Girl, Scarlett Johansson, is as flat and enigmatic as the titular portrait by Vermeer.