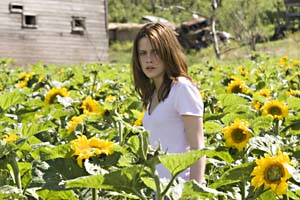 This spook story is a surprisingly mediocre Hollywood debut for Hong Kong’s Pang brothers (of 2002’s The Eye, currently being remade with Jessica Alba). It draws heavily on the haunted-house horrors of the 1980s – The Changeling or Poltergeist – in which the characters are as terrified by the breakdown of family and community as they are by scary possessed toys and mysterious swarms of flies. McDermott plays the long-unemployed paterfamilias Roy, who moves his family back to the land. Squinting honorably into the sun, he tinkers with his tractor while Denise (Miller) scrubs their creepy new farmhouse and installs dramatic-looking sheers on everyone’s beds. Daughter Jess (Stewart) is the first to notice the collapsing banister, the scratches of human fingernails in the floor, the creepy, gray CGI hands that drag you down to the basement, where slime oozes from the floorboards; yet she’s slightly too emo to be believed. Meanwhile, vagabond farmhand Burwell (Corbett) joins the family to grow sunflowers and warns, “There’s something about the land out here.” It’s all pretty much average, although Stewart shows off a final-girl fierceness that commands notice. Though it’s clear what the script (by Dallasite Mark Wheaton) is trying to do with its drama among family farmers and the Pangs seem to enjoy photographing creepy things in a quintessentially American setting – the scariest part happens in a prairie of sunflowers on a perfectly sunny day – the movie doesn’t actually have many tricks up its sleeve besides making things pop out suddenly (such as Davis, the Cigarette-Smoking Man from The X-Files, in wrinkly close-up) and angled shots of a rack of rusty threshers swinging ominously in the breeze. It feels like a movie you’ve already seen before but don’t quite recall clearly. Given its pedigree (Sam Raimi and Rob Tapert are among the producers) an audience might hope for more. 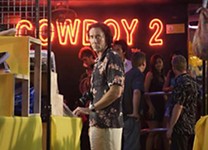 Bangkok Dangerous
The Pang brothers' remake of their own film is all cock and no bang.