You have to hand it to Texas writer/director Stephens: He wrings out a barely watchable hundred minutes here using only washed-up actors and a washed-up genre. Not just anybody can, even with production money from Anthony Michael Hall. Based on the early Eighties Ellebracht slave-ranch case in Kerr County, Stephens' 2005-shot Hoboken Hollow is a bloody mess with passable effects, an overcomplicated slasher with what seems like a cast of thousands. Connery plays Trevor, identified in opening voiceover – yep – as a veteran of the war in Iraq, whose wife has left him because he has "forgotten how to laugh." He's heading west – hitchhiking from the Lone Star State to L.A., itself the most preposterous plot point in a script that features beef jerky made out of human beings – to find peace of mind. Instead, he finds Parker Hilton (Spelling), who promises food and shelter in exchange for a day or two of work. Now halfway through things, we know that Hilton is an agent of the Brodericks, a West Texas family trading in goats, cedar, kidnapping, forced labor, torture, rape, and murder. We know that Trevor is not their first captive. "Are you crazy?" asks indignant German drifter Howie (Rudolf Martin, in one of the worst performances ever caught on film) after Junior and Lois Broderick (Fraser and Frazier) wake him up with a cattle prod on his first morning in the bunkhouse. The answer is yes. The question then becomes why they do what they do. Luring transients and migrants onto their land and keeping them as slaves to work it is one kind of crazy; brutalizing them for shits and grins is another. Like other horror movies have established – among them other horror movies involving crazy Texas families – it concerns making laws in reaction to those the society that has marginalized you has put forth; it concerns getting off on sentencing and punishment. Still, Hoboken Hollow makes us not care. Its victims are characterized so one-dimensionally and unsympathetically that their fates don't resonate; the violence is empty and ineffective, senseless and not the least bit scary. If Stephens had intended this, it would be his film's only success; we presume he didn't, and it's his film's deathblow. Scenes otherwise rumble erratically along, flat as they are both narratively and visually. Hopper as sheriff might as well have not even shown up on set, while solid turns by Holton (you'll recall him as the fat kid who made a clutch shot or two in Teen Wolf's climactic basketball game), Howell, and Madsen are wasted. 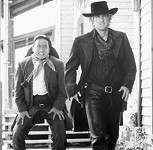 Shanghai Noon
After more than 70 films, Jackie Chan has finally met his match, and wouldn't you know, it's Owen Wilson (UT acting alum and Wes Anderson's ...