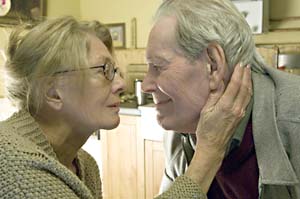 To hell with going quietly into that good night. As O'Toole plays him, elderly British thespian Maurice Russell would very much rather fuck his way off this mortal plain, embraced by and embracing that which he loves most of all: the female form. Like O'Toole himself, Maurice may be a dog, but he's never a cad or a boor or anything less than altogether human in the eye of the audience. Both actor and character are gray lions, claws dulled by floorboards and time, manes intact but fraying, restless, prideful, rueful, and wise, but not yet ready to curtail the hunt. The fire inside belly, heart, and loin still smolders, giving off errant memories of past predations and flaring here and there into present lusts and penultimate grapples. It's an Oscar-caliber performance from O'Toole, which is as much of a surprise as saying the northern English coastline is dreary in winter. Maurice, a still-working actor both toothily charming and altogether compos mentis, whiles away his dwindling days playing bit parts (corpses, mostly) or at the local pub with a pair of equally frail footlights friends – taciturn Donald (Griffiths of The History Boys) and dowdy Ian (Phillips). It's the latter, a drama queen forever atwitter, who announces one day that his sister has sent her wayward daughter to stay with him and, dear God, whatever shall he do? The niece, Jessie (Whittaker), turns out to be a girlish version of what the Brits refer to as a "chav": all bad style and rough substance, a borderline hooligan who spends her ever-idle time taking up space on Ian's couch and inhaling instant noodles and lager. Ian's dyspeptic reaction to this exiled intruder in his midst allows Maurice the opportunity to meet the girl not-quite-cute, and while eyeing this uncultured proto-dole-queuer as she grazes in front of the idiot box, he asks her what she wants to do with her life. "I want to be a model," she confides, warily. But instead of laughing, he secures her employment as an artist's model in a life-drawing class. The move is not entirely altruistic on his part – he's actually taking the class himself, and the gambit would thus allow him a chance to ogle her backside in a socially acceptable fashion – but it's still oddly endearing. Only the perpetually suave O'Toole could pull off the tricky May-December relationship at the heart of Venus without seeming icky or perverse or Bill Murray and do it with such colossal panache, aplomb, and sublime craft (not to mention craftiness). You can still see the righteous conflagration of T.E. Lawrence encamped behind O'Toole's current sloughy and cadaverous visage, and, too, his Maurice contains echoes of forlorn Lord Jim and devilish Eli Cross (of the wonderful but criminally overlooked film The Stunt Man). His burgeoning relationship with Jessie is surprisingly realistic in a host of wholly unexpected ways – this isn't some creepy reverse take on The Graduate – and he mesmerizes you every single second he's on the screen. It comes as a pleasant shock, actually, to see newcomer Whittaker holding her actorly own against the icon O'Toole. The quiet respect Venus displays toward lions in winter, defanged though they may be, is rare enough; the film's respect for unfinessed lionesses-to-be is rarer still. Wherever they're going, no one here is going quietly. 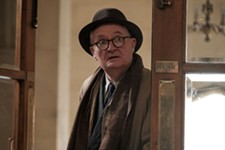