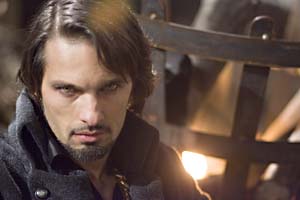 Lycanthropy and young love: Even more than those eternally chic "nosferatim," the primal bristling and crunchy animalistic proclivities inherited by the cinematic progeny of woeful Larry Talbot, Universal's original Wolf Man, are tailor-made for teenage allegory. Dracula and his ilk may rule (and drain) the peasantry at their languid leisure, but the cadaverous undead (silk ascots or no) have nothing on their shape-shifting brethren when it comes to teen angst and post-pubescent hormonal meltdown. Blood and Chocolate is based on Annette Curtis Klause's immensely popular young adult novel of the same name, and even if you haven't read the book, the film's growly romanticism (the Bucharest location filming makes the most of that city's splendidly gothic virtues) is a sly appropriation of Romeo and Juliet – sort of a West Side Horror Story with fangs and fur replacing daggers and decent dialogue. Bruckner's lithe, conflicted Vivian, late of America and therefore very much having a mind of her own on matters of the heart (and, natch, the throat), is slated (as 5,000 years of tradition dictates) to mate with her literal leader of the pack, Gabriel (Martinez). Gabriel is a grimly fiendish Lothario intent on keeping the pack's occasionally toothy relationship to the human populace within the bounds of – well, not good taste, really, yet as any leader worth his incisors should know, the less attention (and silver bullets) drawn, the better. Into this emotionally visceral mix arrives Aiden (Dancy), a traveling American Romeo of smoldering good looks and graces, in town researching a graphic novel on, go figure, the lupine local legends. In short order, Vivian begins to fall for this new, nonbloodthirsty arrival, and thus the stage is set for a love triangle only Stephen Sommers could appreciate. All of which makes Blood and Chocolate come off almost as unfathomably odd as the great Maria Ouspenskaya's film career with Universal Studios back in the day. The script, from genre stalwart Ehren Kruger (The Ring, Terry Gilliam's The Brothers Grimm), does its actors few favors; most of the dialogue verges between the hormonally overwrought and the insipid. On the other hand, director von Garnier has chosen, as an adjunct to Reinhold Heil's appropriately bombastic score, to separately release, in conjunction with the film, a tribute album to gothlings past, including some very unfun cover versions of gothy staples ranging from Depeche Mode ("Stripped"), the Cure ("A Forest"), the Smiths ("How Soon Is Now?" – kill, Morrissey, kill!), and, less clever than it probably sounded preshoot, Echo & the Bunnymen's still-frisson-inducing "The Killing Moon." Pray avoid this transparent marketing ploy if you are able. (And thank goodness Ian Curtis is long gone dead, so at least he won't have to suffer through Philistine's horrifically bad reimagining of Joy Division's "Love Will Tear Us Apart.") Which, come to think of it, nicely echoes the film's central conflict: If your beloved is a carnivorous chocolatier who turns into a wolf – and a number of real wolves are employed to lend a bit more realism to the transformational proceedings – well then obviously, love might do just that. Not as yummy as it sounds, true, but nowhere near as godawful as Van Helsing, a small mercy but very much appreciated. 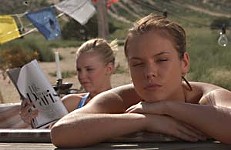 Dreamland
This ensemble piece set in a rural mobile-home park has a solid emotional center despite some dramatic mood swings. 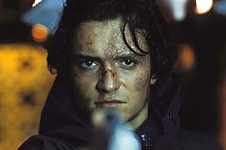