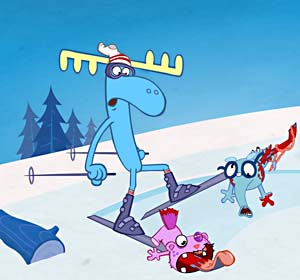 I hate to say it, but Spike & Mike and their annual compilation of hyper-filthy animations may have finally met their match. Virtually all of the 20 or so films listed as part of S&M's 2007 lineup are already sitting on your lap- or desktop at this very second as part of online video depository-cum-soulsucker YouTube's infinite overload of clips. What does this mean for Spike & Mike's touring program? Well, for starters, their core audience no longer has to go through the hassle of getting baked before heading out to the theatre, where they'll endure a lengthy wait in line before jockeying for the coveted aisle seat, which, of course, is necessitated by all the beer they'll alternately quaff and spew, the latter during those unanticipated jolts of onscreen hilarity that always crop up mid-swallow. All of which, let's face it, isn't so much of a hassle as great fun of the sort generated years ago by the late, lamented midnight movie circuit. But suddenly, this year, there's that 800-pound gorilla online, and I fear for the future of the Spike & Mike franchise. Unlike the solitary (or near-solitary) act of punching up obscene little animations via YouTube, S&M's live, in-theatre show comes complete with purebred goofballs sporting truly awful headgear who alternately introduce the main attractions and egg on the audience to often X-rated acts of boisterous, alcohol-fueled tomfoolery. It's a kick to laugh both at them and with them, your fellow filmgoers, and in that sense Spike & Mike's animation festivals are a nifty, modernized take on the bawdy vaudeville shows of yore. You won't get that with YouTube, but you won't get splashed with airborne Shiner Bock by the totally trashed co-ed sitting next to you, either. (Nor, it must be noted, will you get her digits, you soggy Romeo, you.) But enough about that sozzled chippie. What about this year's films? Frankly, like every year's films, it's a schizophrenic, scatologic mishmash. There's the good: the Sad Little Stars' music video for "Don't Fuck With Love" and Brad Neely's genius presidential rap "Washington" (sample lyric: "On a horse made of crystal he patrolled the land, with a Mason ring and schnauzer in his perfect hand"). There's the bad: Festival staple "No Neck Joe" is just plain played-out and should have been retired years ago. And then there's the ugly, which here arrives via John E. Goras' horrifying, mesmerizing bestiality romance, "Chirpy," wherein the avian and the equine get nastier than Janet Jackson at a Bukkake factory on National Freak-a-Leek Day. (No exaggeration, that.) So: YouTube at home, stoned and alone, or Spike & Mike at the Alamo, totally drunk and potentially drenched but maybe, just maybe, going home with that – now that the lights have come up and you've got a good peep at her – awesomely hot, beer-sailing wench? Score one for Spike & Mike. And maybe you, too, you dirty, soggy dog, you. (Thursday-Sunday only.)