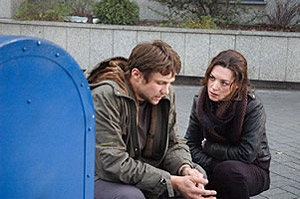 Here's a conundrum: How does one make a Christian horror movie? Sure, it's possible to eliminate the drugs, nudity, and bad language so common in our popular entertainment – and maybe even some of the immoral behaviors. But doesn't the crux of a horror movie usually require some psycho baddie to disrupt the calm of normalcy? Is turning the other cheek a useful tactic to ward off unsavory malevolents and murderous nut jobs? Thr3e, a Christian psychological horror thriller, wants to take on the challenge. This first release from Fox Faith, a new label under the auspices of 20th Century Fox Home Entertainment, seems to accept the fact that murderous mayhem is indeed a necessary aspect of the genre. Based on a novel by bestselling Christian author Ted Dekker, Thr3e almost gives away its mystery by virtue of its title. Yes, there's a psycho killer on the loose: This one is called RK, the Riddle Killer (Moseley). In the fashion of the extreme horror currently in vogue in movies such as the Saw continuum, RK seizes his victims, wires them with bombs, and taunts the rescuers with tautological riddles that need to be solved before the bomb detonates. In the action-packed prologue, RK blows up the brother of a cop (Waddell), who then becomes personally vested in the capture of this maniac. The next victim turns out to be Kevin Parson (Blucas), an aptly named seminary student. Flashbacks to Kevin's childhood are vague and bring up questions the film only answers in the end, and the same goes for his childhood pal Samantha (Jordan), who suddenly appears from nowhere. A visit to the home in which Kevin grew up under the care of his obviously deranged aunt (Barnes) and dingy, fez-wearing uncle (Bower) ought to set off cautionary alarms – but, no. It's situations such as these that make Thr3e such a frustrating exercise in diverted expectations. What initially seem to be examples of inept filmmaking (i.e., illogical actions, physical impossibilities, and a murky visual palette) turn out in the end to be tactics to forestall the revelation of the story's narrative conceit. Christians can ultimately go to this film and be safe from hearing swear words or seeing nudity. But will they take kindly to its dark, psychotic, and lethal manifestations? It's a sure bet the regular gore hounds will be disappointed by the film's transparencies, but will the faithful flock to a film that offers a lot more grit than the pallid stuff that generally passes for Christian entertainment? Ask Mel Gibson. 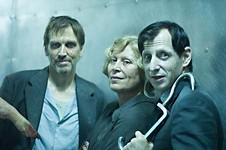 House
In this Christian horror film, a mad killer who claims to have slain God, torments two couples seeking shelter.