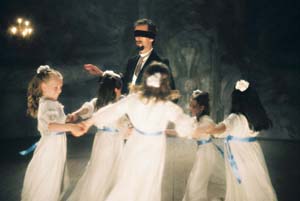 The Piano Tuner of Earthquakes

As in all of the work of the brothers Quay, The Piano Tuner of Earthquakes is shrouded in gloomy atmospherics, Expressionist sets, a story that ebbs and flows with the night-tide logic of a dream, and supremely disturbing stop-motion animation. Of course, in the Quays' world, dreams are only one flimsy membrane away from nightmares, and while The Piano Tuner of Earthquakes is easily the most comprehensible example of their films (i.e., the plot makes sense, more or less), it's also one of the most sluggish. The torpor comes in part from the setting, which, as far as we can tell, takes place on the coast of Spain at the estate of Dr. Emmanuel Droz (John), who has hired the titular tuner (Seracho) to repair a series of musical clockwork automatons of the doctor's devising. Like a dream, this film is wispy and ethereal; like a nightmare, it lodges in your hindbrain and gnaws away with gleeful abandon. AFS@Dobie

Films of the Brothers Quay
...