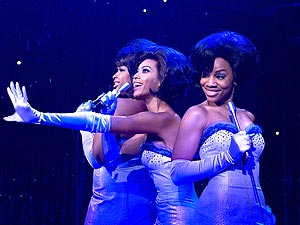 Right from the start, Dreamgirls wows you with such an exuberant energy that you know that you’re in for a sweet ride. This euphoric adaptation of the hit Broadway backstage musical about the Dreams, an all-girl singing group loosely modeled on the Supremes, is an infectious experience of sequins and songs that lives up to the hype. Spanning the musical spectrum from the pre-Motown Sixties to the disco era in the late Seventies – when black music and pop music finally converged – Dreamgirls is a glittery, slick melodrama about how show business can cultivate egos and destroy friendships, all in the quest to be at the top of the heap. A great deal of the credit for the film’s success must go to screenwriter and director Condon, who – after cutting his teeth on the screenplay for Chicago – has fashioned what is best described as a dazzling jewel of a movie, both literally and metaphorically speaking. Not only is it evident that Condon clearly loves movie musicals and pop culture, but he is supremely well-versed in the language of film. Musical numbers that quietly begin behind the curtain as rehearsals seamlessly morph into dynamic onstage performances of the same song with the simple sweeping pan of the camera; more intimate musical interludes in which characters express their feelings to one other (such as the eloquent “Family”) are shot in ways that make them feel emotionally real, rather than artificial. When done right, a song can express so much more than mere words can – it can transcend any speech or piece of dialogue. That observation has never been so true as when Hudson, in a star-making performance, performs “And I’m Telling You I’m Not Going” at the film’s turning point, expressing pain, anger, and desperation with such heartbreaking intensity that you feel she may burst through the screen because it can’t hold her any longer. No question about it: The woman can sing a song. (When was the last time that a movie audience burst into applause at the end of a musical number, or sat through the credits to applaud again when an actor’s name appeared onscreen?) Hudson’s turn as the proud, stubborn, and self-destructive Effie is a revelation; you can’t imagine this movie without it. Pop star Knowles holds her own in the role of Deena, the Diana Ross-like singer who goes from being a pretty, naive girl from the projects to a glamorous international diva/superstar. She subtly imbues the character with a softness and innocence that her real-life counterpart rarely projected. The male actors fare less well, largely because their characters are not as interesting, comparatively speaking, with the exception of Murphy. As soul singer James "Thunder" Early, a ladies man given to referring to himself in the third person, Murphy keeps his schtick in check and delivers a showy performance that has an underlying sadness to it. The two halves of Dreamgirls – the first chronicling the rise of the tightly knit group of characters to stardom, the second depicting the unraveling of those ties as a result of the pressures of money and fame – nicely (if sentimentally) come together in a finale that will leave most with a lump in the throat. Even when it feels packaged like a holiday entertainment that aims to please, watching Dreamgirls is like being on cloud nine. (Opens Monday.)