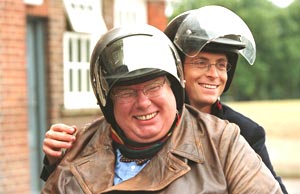 If you like your British movies quick, raunchy, reflective, and bittersweet, then The History Boys is for you. Based on the highly successful play, the film was produced during a break between theatrical engagements and retains its original writer, director, and cast. Alan Bennett, the writer who previously collaborated with director Hytner on The Madness of King George, brings to the screen a sharply whimsical exploration into the purpose of knowledge, performance, and hormones. Taking the industrial wasteland of 1983’s Sheffield as its backdrop, the film follows eight boys on the verge of entering college. Due to excellent board scores, they’re up for scholarships at either Oxford or Cambridge, the golden eggs of British education. As a result, the boys take an extra semester for additional instruction while preparing for the highly competitive entrance exams. Clever, wild, and cocky, the boys are entertaining from the moment they walk on screen. Their instructors include the eccentric Hector, performed with every amount of passion and pity by Griffiths (Withnail and I, Harry Potter). Under Hector’s training, lessons in “general studies” include re-enactments of old Bette Davis movies and the singing of showtunes. Dripping with poetic romanticism, Hector believes that knowledge is to be inhaled, experienced and caressed. Sometimes, quite literally. A homosexual, he enjoys taking the more attractive students for rides on his motorbike in order to cop a feel in their nether regions. Dead Poets Society this is not. Strangely enough, the very heterosexual students consider this pervy practice merely a humorous obligation. Hector’s colleagues include the stalwart, Mrs. Lintott (brilliantly portrayed by de la Tour) and the newly appointed realist, Irwin (Moore). Brought in by the results-oriented headmaster (Merrison) to give the boys some “edge,” Irwin embraces an approach to learning that contradicts Hector’s. For Irwin, knowledge is a game, a talent that can be mastered with the right amount of manipulation and wordplay. As a result, the film becomes a raunchy, raw, and often hilarious exploration into the conflict of learning. The boys engage in wild and distinctly genuine camaraderie and there isn’t a weak link in this casting. Barnett is heart-breaking as a baby-faced Jewish homosexual, Cooper gives a star-making performance as the cheeky rebel with the bedroom eyes, and as the self-aware Christian, Parker is endearingly fun. Clearly, the filmmakers did manage to capture some measure of lightning in a bottle. 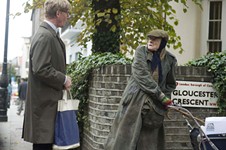 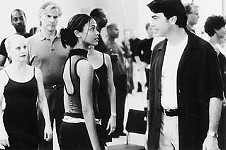