The Architect is a movie designed without a proper foundation – it feels as though it might crumble at any minute. This social drama about the intersecting lives of a dysfunctional, upper-middle-class family in suburbia and the residents of a deteriorating public-housing project is flimsy at best, largely due to the fact that its relatively short running time can’t accommodate the scope of its storylines. Every character in The Architect is undergoing some kind of personal crisis, but you’re seldom given the luxury to fully appreciate the reasons for their turmoil. For starters, there’s the faltering marriage between a self-involved architect and his unhappy wife, the repressed grief of an activist who crusades for the destruction of her home, and the seemingly random sexual confusion experienced by three teenagers. While these narrative threads might be compelling if more fully developed, they just seem to dangle here with little logic to connect them. The central storyline in the film suffers the most. There, an African-American nurse (strongly played by Davis), who lives in an increasingly dangerous public-housing project, campaigns to convince the white architect who designed the buildings to sign a petition to destroy them. It’s a variation of sorts on Ayn Rand’s The Fountainhead but without any evident philosophical or political bent. (The racial/economic differences among the characters are inherent in the film but never come to the forefront in a way that gives shape to the movie.) What motivates the two characters’ behavior in this confrontation of wills is murky and opaque and, as a result, The Architect feels drained of any real dramatic tension. What’s more, the film’s abrupt ending on a rooftop following the suicide of one of the characters is odd and perplexing; it’s as if the screenplay just ran out of steam and stopped cold. Then again, there wasn’t much steam in The Architect to begin with. 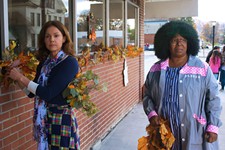