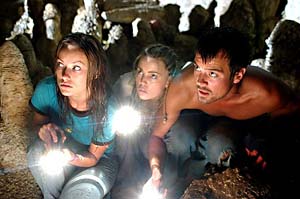 Genre fans will remember directo Stockwell from his role as good-guy Dennis in John Carpenter's adaptation of Stephen King's killer car opus Christine (or possibly as Spider in Losin' It), but he's grown up in the interim and helmed a pair of inoffensive wetsploitation numbers (Blue Crush, Into the Blue) that were filled with the sort of tanned, lithe teenage bodies that, in horror films, tend to spurt the most post-canoodle gore. With Turistas, Stockwell dives head-first into a veritable riptide of churning, vicious exploitation cinema, and the result is surprisingly effective. Taking many of its cues from genre bible The Texas Chainsaw Massacre, Stockwell and writer Michael Ross have managed to update the tired and tiring tropes of your standard teens-in-peril outing by taking them south of the border (to Brazil) and stranding them in the at-first lush and inviting, then hostile rain forest, where they run afoul of a rural sawbones who apparently did his internship under Dr. Butcher, M.D. (that's Medical Deviate, should you wonder). The luckless teens comprise four yanquis led by level-headed siblings Alex and Bea (Duhamel and Wilde), two British lager louts (Askew and Brown), and Aussie Pru (George), the only one among them who speaks Portuguese. After a calamitous bus accident, the group discovers a beachfront paradise populated by many supermodel types and one ingratiating local named Kiko (Steib), who charmingly practices his ESL skills on them before leading them into the jungle, through an underwater cavern system, and into the isolated bed-sitter of the aforementioned physician (very well played by Miguel Lunardi), where, as they say, the magic happens. Turistas is being tagged as a down-market version of Eli Roth's Hostel, but that's lazy criticism and obscures the fact that, if anything, this is the more compelling film, commingling as it does echoes of everything from Ruggero Deodato and Umberto Lenzi's ultrarealistic green hell horrors, the spelunking aspects of The Descent, and Marino Girolami's scalpel-happy Cannibal Holocaust aka Doctor Butcher, M.D. Very believably acted throughout and featuring a literally breathless underwater sequence of cat-and-mouse, Turistas is, surprising, given its lousy marketing campaign and thankless release date, a solidly visceral piece of work. Socialized health care never sounded so good. 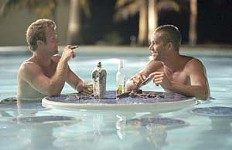 Into the Blue
There's a crisp little thriller anchored in this movie about pretty people wearing skimpy swimwear in a beautiful locale. 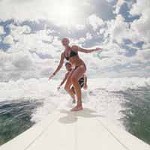 Blue Crush
Same sport (surfing), same locale (Hawaii), same gender and attire (girls in bikinis). That's about as close to Gidget as Blue Crush ever gets. In ...