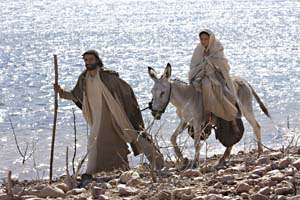 Hollywood does love an epic. Try this on for size: A teenage girl learns she’s giving birth to the son of God; a king so fears the coming of God incarnate that he orders the slaughter of newborn babies; and a trio of astrologers travels more than 1,000 miles to see the realization of centuries-old prophecies. Yes, it’s the story of the birth of Jesus. And religious affiliations aside, the setup has potential for some badass epic filmmaking. Sadly, the tale is presented with a yawn-inducing neutrality more reminiscent of a community-center Christmas pageant than an epic story of divine humanity. Best known as director of troubled-teen movies, Hardwicke (Thirteen, Lords of Dogtown) paints her picture from the perspective of young Mary (Castle-Hughes) and her new husband, Joseph (Isaac). The film follows the teenage bride from the time an angel appears with news of her fate through the couple’s journey to Bethlehem and, ultimately, to Jesus’ birth. In the interim, Mary must explain to her parents and new husband that an angel of God visited her, that she has remained true to her promise of chastity, and that she’s not completely insane. Unfortunately, Castle-Hughes gives such a stone-faced performance, it’s difficult to experience the humanity of the person. Despite her charming breakout in Whale Rider, Castle-Hughes’ restrained Mary becomes an ethereal stoic instead of a frightened teenager approaching an unfathomable challenge with growing faith. Isaac is endearing as the selfless Joseph, but his noble character is so beyond reproach that he seems completely unreal. Furthermore, where’s the fear and the nail-biting? What about the utter astonishment and disbelief? In effect, where’s the messiness? Enter King Herod (Hinds) who snarls through his scenes like a first-century Hitler. Every appearance of the curly-haired menace is accompanied by pounding drums but no exploration into his motivation. Amusing liberties are taken with the three wise men: oddly placed comic relief presented as bickering codgers. Meanwhile, a few moments of intimacy between Joseph and Mary resonate as powerful. But in the end I was just plain bored. The story is good, but the execution favors the safe over the challenging. Personally, I’d rather just read the Bible.