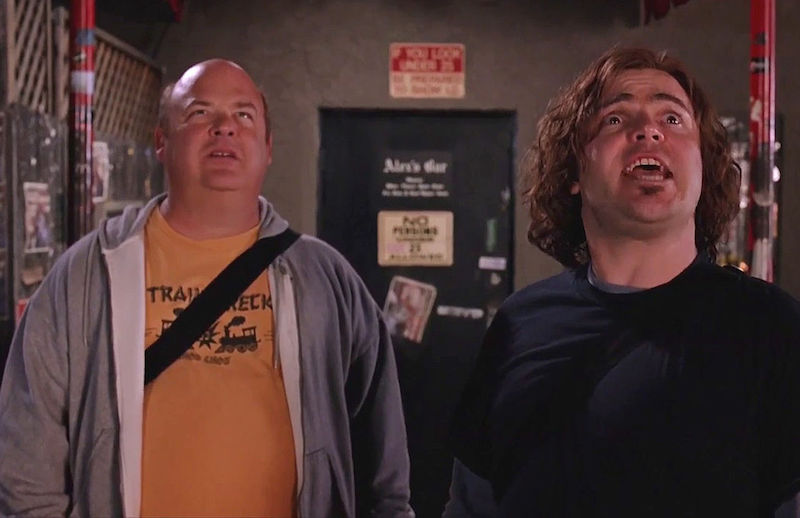 Tenacious D in The Pick of Destiny

Robbins is a highlight but not as high as Sasquatch, who turns up in this exponential adaptation of Jack Black's and Kyle Gass' stony alter egos, JB and KG, after poor JB (who only wants to rock your socks off, baby) ingests some funny mushrooms while traipsing (sorta) through a verdant midnight glen (kinda). JB's hallucinatory romp with the furry one is classic Tenacious D weirdness: It's stoner comedy of the most absurd kind, part fryboy mental drizzle, part wink-wink audience baiting, and wholly, utterly funny. If you're not familiar with the cult of Tenacious D, I'll just say it's a fictional, attitudinal rock & roll duo consisting of the portly, manic Black and the portly, bald, chill-monkey Gass. The self-proclaimed "greatest band in the world" (starring, here, in "the most important film ever made") is a walking, rocking hyperbole storm, incorporating Black Sabbath's dark-arts lyricism with 2112-era Rush's fey fairies and arpeggio runs, and slathering all manner of yuks over the top, from the profane to the pratfall. The plot – actually, it's the pair's origin story – has JB and KG seeking the title's guitar pick, which, having been chipped from the choppers of Satan himself (he shows up in person in the film's blisteringly rocktastic denouement), allows its owner to strum the chords of evil genius with unholy rockability. Both fledgling guitar gods and monsters, JB and KG set out on a cross-country mission to steal the pick from its current resting place in a rock & roll museum and thereby secure their place in rock history (in between bong hits and, um, Tim Robbins). Tenacious D in The Pick of Destiny is not "the greatest movie ever made," but it is the greatest Tenacious D movie ever made, which surely counts for something. Co-written by Black, Gass, and longtime partner and director Lynch (Sarah Silverman: Jesus Is Magic), this has the amiable feel of the duo's early, odder HBO shorts, but doesn't quite hit the highest bizarro notes that fans are used to. It feels somewhat restrained, although whether this represents a bid for a larger, less muzzy audience or is just the result of padding out a pair of characters whose core motivations (pot, rock) have already been well-established elsewhere is unclear. That said, director Lynch keeps things moving with a multitude of chuckle- and snort-inducing sequences, some nifty animation by John Kricfalusi (Ren & Stimpy), and the third-act appearance of Grohl (Foo Fighters, Nirvana) as the Horny One, hankering for his tooth and ready to propose a "Devil Went Down to Georgia"-style rock-off with JB. Obviously, this is a kickass development, and one that eclipses even Robbins' absurdist cameo earler in the film. How much you'll love (or loathe) JB and KG's passion for the power chord and all that that entails will depend, most likely, on your familiarity with the duo beforehand. Then again, you could just smoke out in the parking lot, liberate some nachos and cokeage from the concession stand, and slouch out in the dark, rockin' along with the D. Sweet. 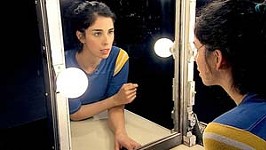 Sarah Silverman: Jesus Is Magic
Spotty comedy delivers on its promise of Total Silverman, but that turns out to be not such a good thing after all.