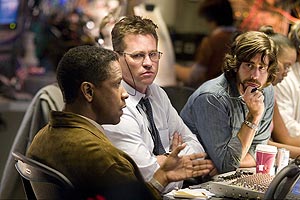 Pairing on their third project (following Crimson Tide and Man on Fire), director Scott and producer Bruckheimer have created a movie that gives the illusion of being an action/science-fiction movie for the thinking person. It’s a story that links up time travel, explosive terrorist actions, and solid detective work with rapid-fire techno-jargon, dexterous visual displays, and the anchoring prowess of leading man Washington. If the science fiction in Déjà Vu has more to do with fiction than science, it’s not as though the movie ever pauses long enough for that realization to fully take hold. This can be both a good and bad thing. The film’s science has more in common with the kind seen on Bruckheimer’s ever-popular, ever-metastasizing CSI TV programs in which reality takes a back seat to gee-whiz effects and gizmos that often substitute flash for logic. We’ve grown used to only sort of understanding the science in Bruckheimer’s new age of police procedurals: As long as we can be dazzled by viewing biochemical reactions and computer enhancements in seconds rather than the days, weeks, and months they would take in reality, we grow content to privilege the fiction over the science. And so it goes in Déjà Vu, where a group of FBI scientists has accidentally discovered a passageway through wormholes and some such that allows them to see four days and six hours into the past. They take into their confidence ATF agent Doug Carlin (Washington), who is investigating the home-grown terrorist explosion of a ferry boat in New Orleans on Fat Tuesday. The first 10 or so minutes of the film, which detail the preliminaries before the blast, make up a terrific bit of filmmaking, layering on elements one by one and culminating in a camera-ready inferno. Another triumphant episode is the film’s climactic car chase, which occurs in both the past and the present – and at 100 mph, who’s stopping to ask questions? Washington helps foster the film’s believability with his smart detective work and somewhat incredulous demeanor, while Kilmer walks through a thankless role as the chief FBI agent, and Caveziel has gone from playing Jesus Christ to homegrown terrorist. Goldberg practically steals the show, however, as the head FBI geek-speaker, who’s still hip enough to throw in a reference to the old SNL “more cowbell” sketch. As the murder victim, Patton (Idlewild) entices, and Carlin pursues the mystery of her death with Laura-like devotion, but there’s still something unseemly, age-wise, about the burgeoning love (in the present or the past?) between the two (he’s at least twice her age). Déjà Vu was the first studio movie to film in New Orleans after Katrina, and though images of the devastation are included, it’s unsettling (and again, unrealistic) that not a single soul in the movie speaks with a New Orleans accent. Déjà Vu has enough style and forward (or is it backward?) momentum to keep viewers aroused. It’s only after you leave the theatre that your head starts to throb.