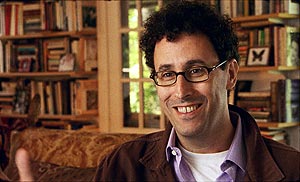 Documentarian Mock (Maya Lin: A Strong Clear Vision) presents her subject as a play in three acts. There is Tony Kushner, the politically outspoken playwright, whose Homebody/Kabul blasted political conservatives’ embrace of the Taliban before 9/11. There is Tony Kushner, the kid who grew up gay, leftist, and Jewish in Lake Charles, La.; the film follows Kushner home to visit his father, Bill, a mild-mannered, retired hardware-store owner and apparent Republican. And then there’s Tony Kushner, the activist, who poll-watches in Florida. The tripartite structure is too academic – “Act III: Collective Action to Overcome Injustice” reads one intertitle – while the editing is ill-defined, and it’s easy to get lost in the film’s fragmented timeline. Yet Kushner is a warm and engaging presence, and Mock documents his life adroitly. Though clever on his feet and fiercely driven by his social conscience – when he’s not writing plays, Kushner speaks at schools, demonstrations, and at one point a credit union – he’s also very much a regular guy, gap-toothed and a little goofy, among Pulitzer Prize winners. We see his wedding (where Bill gives a lovely speech) and a trip to his “fat counselor.” We also see the mounting from start to finish of Caroline, or Change, Kushner’s musical (with Jeanine Tesori) about race and class in America, told in the story of an argument between a housemaid (the excellent Tonya Pinkins) and the family’s little boy (Harrison Chad) over loose change in the laundry. But the film’s intimacy is also a weakness – or at least it lacks the conflict its title suggests. (Kushner seems more inspired by angels than wrestling with them.) Mock’s approach to Kushner is so casual and friendly that it never steps outside of his own life for a glimpse of its context. Thus the film recommends itself most strongly for fans, and I’d be remiss not to mention Marcia Gay Harden’s perfomance as Laura Bush in “Only We Who Guard the Mystery Shall Be Unhappy,” a monologue on the Iraq war and The Brothers Karamazov published in The Nation. AFS@Dobie