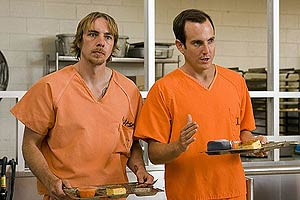 It's going to be difficult, if not impossible, to avoid comparing subsequent comedy outings to the highest watermark that is Borat for the foreseeable future. Sasha Baron Cohen's buffoonish Kazakhstanian newsman is ridiculously hilarious in ways that most Hollywood chucklers seem to have forgotten – or worse, never knew. Falling squarely in what I'm going to call the Knows but Forgot camp is Bob Odenkirk, late of the beloved Mr. Show and the somewhat less revered animation-cum-serotonin reuptake inhibitor, Tom Goes to the Mayor, of the Cartoon Network's Adult Swim programming bloc. Co-written by Ben Garant, Thomas Lennon, and Michael Patrick Jann, who have a hand in Comedy Central's often brilliant cop comedy Reno 911!, Let's Go to Prison has the look and feel of a much shorter bit of sketchy shenanigans brought up to feature running time; it's not so much funny as sporadically amusing. For long stretches of time, however, it's just a flat-out bore, milking prison gags that were ancient when Alcatraz was new and never connecting with the audience's funnybone in any way other than the "Funny, I thought this was supposed to be a comedy" brain teaser. Shepard plays John Lyshitski, an in-and-out con who decides to take his revenge on the judge who long ago sealed his hoodlum fate by casting him to the juvie wolves. As it turns out, the object of Lyshitski's ire has shuffled off to that big night court in the sky, and so Lyshitski schemes His Honor's self-important and thoroughly white-bread son (Arnett) – as well as himself – into the pokey instead. Predictably, Junior soon has the inmates eating out of his, um, stainless-steel toilet, roping a lovesick behemoth (McBride) into his personal circle, and winning the loyalty of the local white-supremacist gang by accidentally offing their unloved leader. And so on. Shepard's always been something of a comedy cipher (see Zathura), operating either in either sleazy or puppy-dog mode with little middle ground, but here he's the best of a bad bunch. Arnett, with his generic looks, delivery, and spotty comedic timing, makes about as much of an impression as a moth hitting macadam, and McBride takes the wacky clichés of prison rape and does absolutely nothing with them. The real crime here is that Let's Go to Prison made a daring escape from direct-to-video stir into the relative freedom of your neighborhood multiplex. Consider this one disarmed and extremely pointless. The Brothers Solomon
With three great comic talents in Will Forte, Will Arnett, and director Bob Odenkirk working together in relatively untried and controversial comedy territory, the only result is a syrupy fable about love and family.