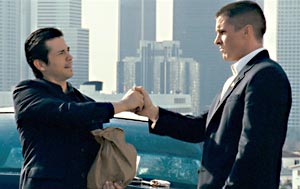 Ayer (Training Day) is fast becoming the movie world’s foremost chronicler of life in Los Angeles. Not the glamorous L.A. of movie stars and models, but the one populated by gangsters and crooked cops, where everyone has a gun, a shaved head, and a closet full of sleeveless undershirts. Harsh Times, Ayer’s latest screenplay and his directorial debut, is a violent, phantasmagoric trip through the urban hellhole that L.A. likes to imagine it’s become: It’s Training Day without the possibility of redemption or the hope of a hero. Bale plays Jim Davis, a former Army Ranger who drifts back into a life of petty crime and degeneracy after getting rejected for a job with the LAPD. Like a sinister Don Quixote, Jim drives through the darkest parts of Los Angeles with his Sancho, Mike (Rodríguez), riding shotgun, getting into all kinds of trouble – drinking, drugging, fighting, tormenting shop-owners, robbing drug dealers – and spiraling deeper and deeper into an abyss of moral vacancy and societal derangement. For Mike, these drives are little more than regressions into adolescence and a denial of adult responsibility. Jim, on the other hand, is a true sociopath, haunted by memories of what he did during his time in the military, biochemically drawn to acts of extreme violence, and unconcerned with trivialities such as the difference between right and wrong. (No wonder the Department of Homeland Security’s drug-enforcement division is interested in hiring him.) Ayer’s writing outpaces his skills as a director, but Harsh Times wins in the end by keeping its fingers wrapped tightly around its viewers’ throats. Bale plays Jim as a raw nerve, cursing and glaring and flexing his muscles to prove to the world he’s worth something and that he thinks the world is worth nothing in return. And Rodríguez is excellent as Mike, whose sense of loyalty and friendship threatens to swallow him whole and drag him down into the bloody morass that is his best friend’s psyche. 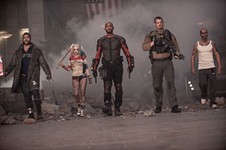