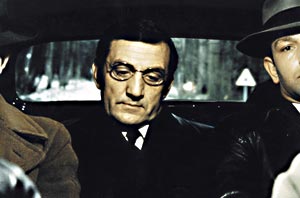 Although made in 1969, this French masterpiece is receiving its first stateside release with a new print struck for the occasion. It’s a stark and unvarnished story about Resistance fighters in Vichy France in 1942-43 when the French leadership allowed the Nazis to occupy the country. Unlike the romantic images of freedom fighters perpetuated by the popular media, Melville’s movie (which is based on a 1943 novel by Joseph Kessel, who also wrote the novel Belle de Jour) is stripped of self-congratulatory hero worship and other puffery. Army of Shadows bears some of Melville’s trademark touches, such as his film noir aesthetic and focus on the underground social and moral substrata. Melville’s Resistance fighters are generally not seen engaged in feats of derring-do; instead they are more wrapped up with the daily tasks of survival, getting from here to there while escaping detection. It’s a fretful life, one that can be ended by a single betrayal or unconscious slip. What we witness is the stamina and obduracy the life requires, a life known firsthand by Melville and Kessel, who both fought in the French Resistance. Army of Shadows gradually takes the shape of a thriller, as various characters are placed in detention camps, traitors are exposed and dealt with, and small victories and losses come and go. There is a rigorous rationality to the process, and yet that still does not prepare the viewer for the moral slapshot that occurs in the film’s denouement. By this point we have been party to several tense sequences (the escape into a barbershop is a prime example of Melville’s storytelling skill) and relational absurdities, but this final blow to the moral order is a real affront to our composure. And yet the manner in which it is carried out, with faces fully visible to the victim, inspires respect amid the horror. Ventura, a well-known character actor, delivers a performance that is the quintessence of restraint and calculation. And if there’s only one lesson I can take away from this film it’s this: Always keep a cyanide pill handy. (AFS@Dobie) 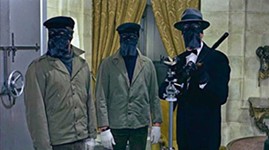 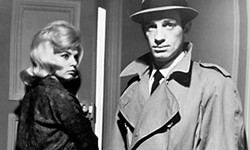