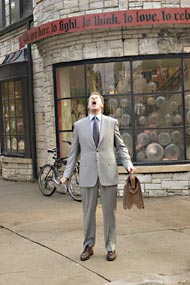 Harold Crick – IRS auditor, milquetoast, and poster child for obsessive-compulsive disorder – wakes up one morning to the rather unsettling realization that he has the voice of an Englishwoman narrating his life. The voice describes the state of Harold’s lonely existence; it lists his neuroses and personality quirks; it even counts the number of strokes of his toothbrush (a number that never changes). At first, Harold seems less concerned than might be expected; he merely trudges through his daily routine like the voice is just the latest in a series of slights and injustices life has heaped upon him (for a truly lonely soul, maybe even a disembodied voice beats no voices at all; surely someone more well-adjusted would go mad inside 15 minutes). But when the narrator announces that his death is imminent, Harold decides he has to find out who this author is and stop her before she has him thrown off a bridge or into a turbine. It turns out the voice belongs to Kay Eiffel (Thompson), a talented but troubled novelist who’s famous for her dedication to killing off protagonists. In fact, the only reason Harold is still alive is that Eiffel is suffering from an epic case of writer’s block and can’t figure out the best way to off him. A good movie but not a great one, Stranger Than Fiction is reminiscent of the films of Charlie Kaufman (Adaptation, Eternal Sunshine of the Spotless Mind) but lacks that writer’s conceptual rigor and imaginative power. Too often the movie gets lost in the thicket of its own ideas and fails to tackle some of the juiciest questions those ideas raise: How come Eiffel doesn’t narrate those parts of Harold’s story that involve his looking for her? Did he exist before the book? And how could he exist after it? Kaufman would have had a field day answering these questions. Fiction screenwriter Zach Helm, though, seems unable to fully get his head around them. As Harold, Ferrell is deadpan almost to the point of lifelessness. Unable to fall back on his trademark frat-boy boorishness and chronic nudism, the former Saturday Night Live star retreats into somnolence. Thompson, on the other hand, is excellent as Eiffel, the novelist with a morbid worldview, and Hoffman is clearly having a ball as the unflappable professor Jules Hilbert, whom Harold seeks out so he can get some sort of handle on the sudden literary significance of his meager little life. Hilbert is both Virgil to Harold’s Dante and the most stringent aesthetic philosopher who ever roamed the halls of academia: When he reads Eiffel’s final manuscript, he declares the book a masterpiece and breaks the news to poor Harold that his death, however unfortunate, is essential to the novel’s artistic vitality. Art is beyond morality, he argues, and true art will outlive us all, so what’s one life sacrificed in the name of creative greatness?