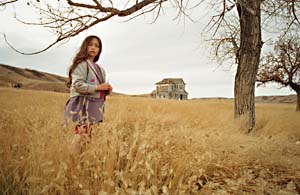 When Terry Gilliam set out to make a screen version of Don Quixote in 2000, he ran up against a longstanding Hollywood legend that any attempt to film the book would meet a disastrous and pitiful end. Undeterred, the director trudged stubbornly ahead. Well, in the end, destiny did take a hand, as illness, bad weather, and financial difficulties plagued the production, forcing Gilliam to admit defeat and shut down the film, thus freeing him of the Quixote curse. Or maybe not. Maybe the movie gods’ wrath extended beyond the set of The Man Who Killed Don Quixote. Maybe Gilliam is damned for good. How else can one explain the enormous fall from grace he’s endured over the past six years, from the cinematic heights of The Fisher King and 12 Monkeys before the Quixote affair to the bottom of the deep well that was The Brothers Grimm after it? Let’s hope for Gilliam’s sake that he can blame his latest, Tideland, on such supernatural forces, because otherwise there may be no excuse for this ugly, disturbing, and misguided mess. Tideland, the story of a modern-day Alice in Wonderland named Jeliza-Rose (Ferland) who retreats to her imagination to cope with a life of squalor and severe parental neglect, is a scattershot and miserable affair from beginning to end, a plot-thin movie about a damaged little girl playing dress-up with her equally damaged dolls. Jeliza-Rose wanders through the prairies outside her lonely house creating worlds out of the air, talking to herself to make up for a lack of meaningful human contact, and eventually falling in with a psychologically tortured lobotomy patient and his equally disturbed sister. Gilliam has always been sympathetic to traumatized characters with fertile imaginations, and over the years he’s mastered a brilliant and original camera style that allows his damaged heroes to exist outside their circumstances and find a kind of internal sanctuary. But when they’re used to tell a story as dreary, unfocused, and exhausting as Tideland, the director’s trademark dreamscapes and disorienting camera angles feel like so much artless window dressing.