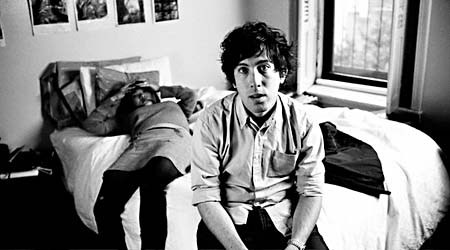 This indie rambler was my favorite movie of South by Southwest 05, where it premiered. But before I go any further, let’s establish that Mutual Appreciation is not for you if you go to the movies to see things blown up or if you expect such conventional niceties as a three-act structure or lighting effects not achieved by yanking up a window shade. Writer/director/actor Bujalski has been compared to Rohmer and branded the “emo Cassavetes”: His movies have an astoundingly lifelike rhythm. Conversations sometimes drag on too long, as they do in real life. (When was the last time a conversation ended exactly when and how you wanted it to?) The film opens in the middle of a discussion of vegetarian iron deficiency and moves on as twee popster Alan (Rice) finds a drummer (Micka) to gig with, half-heartedly gets involved with an underground DJ (Lee), and confronts his feelings for his best friend’s girlfriend (Clift). The movie is made of small moments; they add up in your mind to something bigger later, the way life does outside of movies. Bujalski’s milieu is the postgraduate headspace, the years of putting off a day job and sleeping on somebody’s floor, and he’s understatedly funny about it. (“So, I don’t have any chairs or anything,” says one indie kid. “But you can sit down.”) Rice, who stole the show with a small part in Bujalski’s Funny Ha Ha, from 2002, is infectiously watchable, a rumpled and slouchy rock-nerd antihero. During one night of misadventures that won’t end, he ends up quite naturally in drag with an apartment full of strangers, trying but failing at drunken, labyrinthine conversation and sitting on an accent table. This is serious business to Alan, who finally whimpers to the woman applying his eye shadow: “Do you have a boyfriend?” Filmmaker Bujalski will attend the 7:35 and 10:10pm screenings of his film on Saturday and the 5 and 7:35pm shows on Sunday for a Q&A.