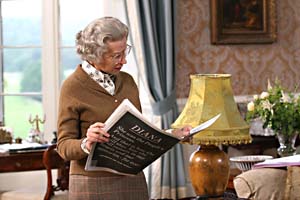 The Queen provides a glimpse of the British monarchy at a contemporary crossroads between supreme dominance and utter irrelevancy. The royal family is the physical embodiment of the country’s continuity of its beliefs and traditions, the symbolic representation of the country’s long history and assured progression into the future. Frears’ movie is something of a backstage palace drama, a work of speculative history in which we are privy to some of the thoughts and conversations that might have occurred in the palace’s inner chambers in 1997 during some particularly chaotic and unrehearsed moments of Queen Elizabeth II’s rule. The movie begins as the newly elected prime minister, Tony Blair (Sheen), arrives at Buckingham Palace for a ceremonial meeting with the queen (Mirren), who must formally invite Blair to form a government despite his popular election by the citizenry. Several months after this awkward meeting, while the royal family is vacationing in their castle in Balmoral, Diana, the divorced Princess of Wales, dies in a car crash in Paris. The rest of the film concerns the queen’s inability to understand the people’s massive outpouring of grief for Diana, and the people’s distress over the royals’ apparent absence of sorrow or mourning. This disconnect is understood by Blair, who takes it upon himself to entreat the queen to cut short her vacation, return to London, and demonstrate visible signs of mourning. It’s an ironic position for him to take, having come into office with a progressive agenda that disdained the monarchy. He is also subject to constant goading by his wife (McCrory), who is an ardent anti-monarchist. Meanwhile, we witness the royal family padding around the recesses of their castles, weirdly watching the constant footage of themselves on television and responding unapprehendingly as the populace growingly condemns them for standing on ceremony. The screenwriter Peter Morgan is also responsible for another movie out currently, The Last King of Scotland, and curiously, The Queen succeeds in its speculative history in ways that Morgan's Idi Amin drama never does. Very few liberties are taken with royal-family intimacies in The Queen, and news footage of Diana is all we see of the "people's princess." The story’s tension derives specifically from the royal family's responsibility to show a public face at all times – a responsibility that grows ever more cumbersome and unrealistic in this electronic age. We feel for the queen’s predicament, although her Deerhunter moment of truth at Balmoral lays on the sentiment a bit too thickly. Nevertheless, Mirren is magnificent in the role, which is sure to earn her an Oscar nomination to go along with the Emmy she received for playing Elizabeth I. Sheen, Cromwell, and Syms also give excellent interpretations of their real-life characters. The Queen is palace intrigue at its finest.