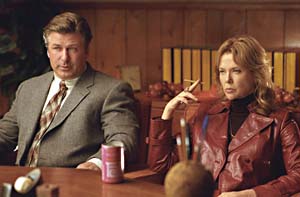 I'm not entirely sure, but near as I can tell, this adaptation of Augusten Burroughs' memoir of family dysfunction finally and irrevocably lost me right about where the cat ended up in the stew pot, stirred with maniacally morose glee by Paltrow. It's an added bonus, of sorts, that the feline in question is named Freud and is – before his presaucepot demise, anyway – the lone fixture of mammalian sanity in a household seemingly overrun by escapees from the furthest and dankest of Bedlam's pockmarked cells. Watching poor Freud reconstituted as dinner put me in mind of two things: Stephen King's Pet Sematary and Paltrow's far more emotionally urgent turn in Wes Anderson's The Royal Tenenbaums – Running With Scissors' far more appealing comedic twin. There are plenty of similarities between the two, not least of which is a plot that revolves around a wildly out-of-control family in a garishly over-art-directed manse. That Anderson's smart and hopeful film comes off as the more accurate depiction of family strife and the dangers of mis- or noncommunication speaks volumes. Where Anderson's film was sly and knowing and hilarious, while offering up some succinct human truths, Murphy's take on Burroughs' hellish childhood is tonally fractured, unleavened with black-as-pitch gallows yuks and – very nearly its saving grace – a series of performances that pitch and yaw between "normal" and utterly mad. As Burroughs' mentally unbalanced mother, Bening ricochets between shrieking tirades aimed at her upper-middle-class, alcoholic husband (Baldwin, almost a model of understatement) and her inability to get her writing career off the ground. Running With Scissors takes place in the Seventies and gets a lot of mileage out of that decade's more nightmarish fashion disasters; I realize that they're meant to underline Bening's disintegration – and point out young Augusten's (a sympathetic Cross) own fragile mind-set – but there's only so much canary-yellow art direction you can witness before you, too, head south for the winter. When Cox shows up early on as Bening's oddball, borderline insane psychiatrist, Dr. Finch, and adopts poor Augusten into a brood consisting of Fiennes' rough-trade leatherman, Wood's overpainted teen sex kitten, and Paltrow, you wait for the other shoe to drop, wondering why no one's laughing even as the film urges you to. No shoe, or laughter of any but the most vicious sort, is forthcoming. Clayburgh, as the wholly weathered Mrs. Finch, is a fine surprise; she looks and acts and sounds like the real victim of this awful, pink-painted carnival of horrors, and, at film's end, she is. But neither her nor Bening's remarkable and exactingly off-kilter turns are enough to salvage Burroughs' cinematic maelstrom. 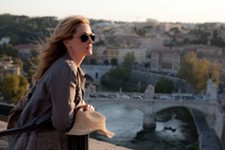 Eat Pray Love
Julia Roberts stars in this adaptation of Elizabeth Gilbert's novel about a journey of self-discovery, but the result is undercooked.