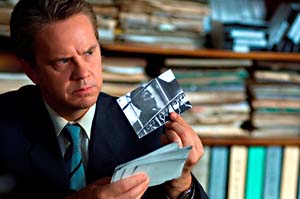 Australian director Noyce continues to explore the havoc and repercussions caused by white interlopers toward indigenous peoples in this straightforward account of real-life black South African activist Patrick Chamusso (Luke) and white Boer police agent Nic Vos (Robbins), who hunts him with Terminator-like zeal. Of course, one man's freedom fighter is another man's terrorist, and in 1980s Johannesburg, the demarcation between the two was particularly vague (to the ruling whites, anyway). When law-abiding oil-refinery foreman Chamusso – and later his beautiful, apolitical wife, Precious (Mbuli) – is rounded up and tortured by Vos' men in the wake of a botched bombing plot, this mild-mannered family man discovers untapped wells of transformative vengeance and revolutionary fervor in his veins. He promptly joins then imprisoned Nelson Mandela's African National Congress and exits the country, returning only after his Soviet-sponsored warfare skills have been honed to a razor's edge. Catch a Fire benefits from some stellar performances, particularly those of its two leads. Chamusso, who is depicted as both a hero and as a flawed man who keeps a big secret from his loving wife, comes off as something of an activist archetype: the ordinary man caught up in the extraordinary riptide of his nation's turbulent history. Robbins, despite the fact that he's playing a man who easily could have come off as a sadistic bastard (the torture of both innocent and not-so-innocent South Africans plays an emotionally critical role throughout the film), imbues chilly Vos with the vagaries of self-doubt, however slight, ultimately rendering him as ensnared in history's pull as his quarry. It's always odd to see Robbins, a political activist in his own right, playing at villainy (see Arlington Road, Bob Roberts), but here he descends into the role so thoroughly that the lopsided smile becomes less a notation of cockeyed boyishness than a treacherous Cheshire smirk. The impossibly catchy "revolutionary songs" of the time (which sounded, to white ears, like nothing more than cheery workers' tunes – the South African version of "Hi Ho, Hi Ho" – but were, in reality, a cunning way to transmit information and rally the revolutionary spirit) and some well-placed Bob Marley buoy this period film. Catch a Fire's only failure is its inability to provide a larger context for the events it depicts. That said, if you already know the lyrics to UK ska outfit the Specials' "Free Nelson Mandela," you'll do fine. Others may want to stop off at Wikipedia's ANC page before catching this particular fire. 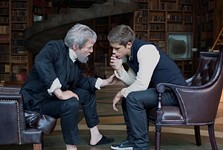 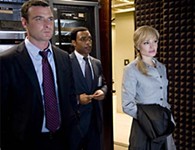