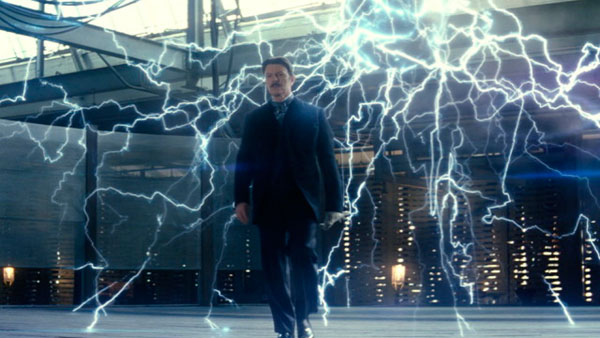 Watching Bowie as Thomas Edison's archenemy Nikola Tesla, you wish the role (a glorified cameo) were more integral to the story. And while Bowie's AC vs. DC turn as the badgered Tesla is key to this tale of rival magicians falling down the rabbit hole of mutual obsession in turn-of-the-century London, it's not particularly pivotal. After you get past the spatial oddity that is Bowie's performance (he plays Tesla with a mustachioed gravitas that borders on the surreal), you're left with Nolan's adaptation of Christopher Priest's novel, a film front-loaded with borderline sociopathic characters, personal tragedies that only fuel the fires of an already wildly ambitious rivalry, and some of the most bizarre cross and double crosses since George Smiley came in from the cold. Jackman plays Robert Angier, a somewhat dandified illusionist who fractures permanently after the death of his beloved wife. That death, the grief-stricken linchpin of the film's emotional core, comes about when Bale's trickster Alfred Borden bungles the tying of a knot during a water-torture illusion – or did he? The truth is superfluous to the story; in fact, truth itself is little more than a word in The Prestige, a film that both celebrates the wonder of being fooled and the foolishness of wanting just that. Obsessed with being the best at their craft, these two magic men find themselves on increasingly slippery slopes, with, as the film begins, one of them in the dock, accused of the murder of the other. Nolan is more regimented than ever – the various hairpin twists and triple-turns in the the story demand it – but unlike his most recent film, the operatically darker Batman Begins, there's a noticeable surfeit of passion on display here. Bale and Jackman are fine as narrative doppelgängers, and they both work their features into acute images of incipient madness, but The Prestige still lacks an emotional center that the audience can identify with. Although Johannson and Perabo strive mightily to flesh out the inner turmoil of their double paramours, Angier and Borden stubbornly refuse to feel altogether human. Which, likely as not, is Nolan's intention: Nothing dehumanizes so much as obsession and doubly so when coupled with ambition.