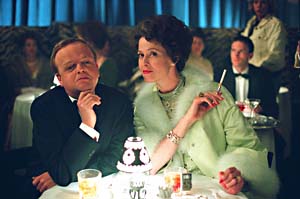 Comparisons are inevitable, although they're not truly necessary. The last couple of years have bestowed two Truman Capote pictures on the moviegoing public, and not only that, both movies concentrate on the same period of the writer's life – the years during which Capote worked on his stylistically groundbreaking book In Cold Blood. Although Philip Seymour Hoffman received the Best Actor Oscar for his shape-shifting turn as the diminutive author, that doesn't preclude British actor Jones from also turning in a marvelous performance as the distinctive writer. Director McGrath has based the Infamous screenplay on George Plimpton's book about Capote. The finished film places a greater emphasis on Capote's sexuality than the earlier film does, creating a character whose brazen queerness becomes an issue for those he encounters but not for the man himself. This leads to speculative sequences in which there's a hearty lip-lock between Capote and incarcerated murderer Perry Smith (played by Craig, the next James Bond), as well as implications that further sexual contact might have occurred. Capote's slow demise during the time in which he waited for the book to be published and the years afterward, in which he published nothing of consequence for the rest of his life, is subtly implied by the movie to be the result of his agonizing love for the killer. The second half of the movie is filled with these sorts of questions, yet they are all left basically unanswered. The sense in which the movie really shines is in its portrait of milieus: the New York society whirl in which Capote was a shining light and the Kansas farm town in which Capote and his writing companion Harper Lee (Bullock) were citified fish out of water. The textures of the film feel so right, especially in its opening stroke: a nightclub scene at El Morocco in which Paltrow croons from the stage like a sultry Peggy Lee while backed by a house band featuring Austin musicians Mark Rubin and Glover Gill, among others (the movie was filmed in Austin), Capote and Weaver as Babe Paley, wife of the president of CBS, listen and dish. As Bennett Cerf, Bogdanovich also delivers another of his near-perfect impressions. Yet, McGrath employs a technique in which all these observers to the Capote myth speak directly to the camera, a ploy that probably helps capture the cut-and-paste tone of Plimpton's work but does little to help advance the film narrative. Nevertheless, Infamous successfully captures a sense of the loneliness of a writer's life. Capote may be surrounded by tout le monde, but in essence, he is just using them as a sounding board for his words before committing them to print. 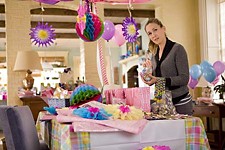 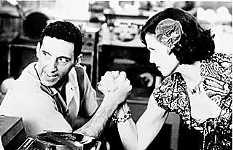 Company Man
I've got good news and I've got bad news. The good news is that Company Man is only 81 minutes long. The bad news is ...