Riding Alone for Thousands of Miles

After forays into martial-arts epics with his last couple of films (House of Flying Daggers, Hero), Chinese director Zhang returns to more familiar footing with the intimate drama Riding Alone for Thousands of Miles. It's the kind of story that shows more than it tells, a story that's forged in the spaces that exist in between characters and spaces. It's something of a "shaggy dad" story, in which Takata (Takakura), an older man who lives by himself, takes the bullet train to Tokyo upon learning of the grave illness of his grown but estranged son. Although his son won't receive him, Mr. Takata embarks on a journey to record a particular performance of the masked opera, Riding Alone for Thousands of Miles, which he has reason to believe his son wants to hear. Along for his journey come the helpful but ineffective guide Lingo (Qui) and the reluctant but instrumental translator Jasmine (Jiang). They find the opera singer who is in prison and bereft, begin a new journey to fulfill the singer's one wish, encounter an entire village that cares for one illegitimate child, and Takata forms a bond with the boy. Throughout, they travel across stunning landscapes that also become part of the story. Yet Takata is inscrutable, the meaning of his quest remains as personal and unexplained as his isolation at the beginning is. Known as the Clint Eastwood of Japan, Takakura's dominant performance deserves such comparison. It further stands up to the film's more melodramatic tendencies, creating a buffer against the story's inclination to go soft. Yet, I'd argue that this film is ultimately more of a comedy than a drama, as each stage of the journey leads somewhere else and none of the interludes ever turn out quite as planned. Clearly, Takata learns things along the way about asking for help when needed, and extending expressions of kindness and emotion when appropriate. Yet, as with his own son, the journey is one of fumbled opportunities and missed connections. We are all masked figurines in the landscapes of our souls, where shaggy dads traverse the pathways between community and loss. 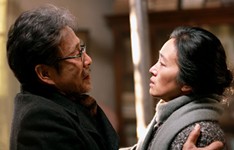